Familypedia
Register
Don't have an account?
Sign In
Advertisement
in: Buchanan (surname), Born in 1791, Died in 1868,
and 29 more

Edit Facts
James Buchanan (April 23, 1791 – June 1, 1868) was the fifteenth President of the United States (1857–1861). He was the only President from Pennsylvania and the only President to never marry. As president he was a "doughface" who battled Stephen A. Douglas for control of the Democratic Party. Scholars consistently rank him as one of the two or three worst Presidents. As southern states declared their secession in the lead-up to the American Civil War, he held that secession was illegal, but that going to war to stop it was also illegal. 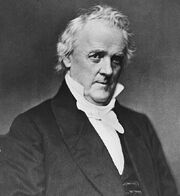