Familypedia
Register
Don't have an account?
Sign In
Advertisement
in: Garfield (surname), Born in 1865, Died in 1950,
and 15 more

J.R. Garfield followed his father into politics and became Secretary of the Interior under President Theodore Roosevelt.

Household Census for J.A. Garfield taken at Census Place E. D. 39 And 40, Washington, Washington, D.C., District of Columbia. This is while he is serving in the House or Representatives and campaigning to run for the office of President (note occupation listing error.) 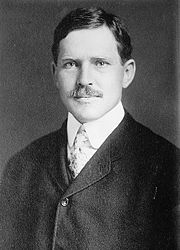