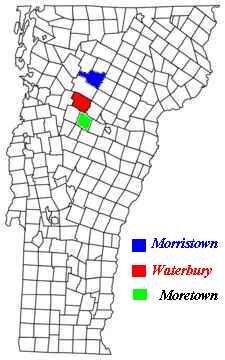 James and Ellen probably married about 1866 in Waterbury, Washington Co, VT. They moved to Michigan sometime between the birth of their son Thomas Martin in 1873, and the birth of James A. in 1878. They moved to Iowa sometime between the birth of their son Patrick Henry and 1895 when the family appears in the Iowa State Census for Meadow township, Clay Co. By the 1900 census they were located a few miles to the north in a rental property in Lakeville township, Dickinson Co, IA. Lakeville lies on the west side of Lak Okoboji, one of Iowa's "Great Lakes", and a popular recreational areaT. Their census entry for that year indicates that they had a total of seven children, five of whom survived, including two girls and three boys. At the time only their son James A was living with them. Ellen died in 1901. James Sr. died the following year in Cass Minnesota, where he is thought to have been visiting his daughter Tressa, who had just given birth to a son.

James S, was the son of James Morrow (1784-1881) and Katherine McNulty (1802-1894), the immigrant ancestors. James and Katherine married in Ireland c1832, as their first child, Maria, was born there in 1833. Examination of the DOB's and POB's of their children suggests that James and Katherine came to America c1836, about ten years prior to the beginning of the Irish Potatoe Famine. They settled first in Moretown, Washington Co, VT, and later moved to Waterbury in the same county. The death certificates of James and Katherine identify their parents as Patrick Morrow and Bridgett McCarty, Mark McNulty, and Mary O'Harren, respectively. We have little other information about them.

Little is known of Ellen's family, beyond the fact that they were Irish, and immigrated to America in 1847. That later point is known only because two of Ellen's children, Margaret Mariah, and Thomas Martin, identified their mother's place of birth as "at sea", indicating that she was born at the time of her parents immigration to this country. Family tradition passed down by Ellen's Granddaughter, Evelyn Francis Morrow (1913-2005), relates that her grandmother Sophia Cecelia Mucha ( - ) had been born at sea or at Ellis Island. However, ship records have been located that show Sophia as immigrating with her parents and landing at New York when she was about three years of age. Thus, the family tradition that Sophia was born at Ellis Island is probably derived from the fact that Evelyn's other grandmother, Ellen Stackpole was in fact "born at sea".