Familypedia
Register
Don't have an account?
Sign In
Advertisement
in: Warren (surname), Born in 1726, Died in 1808,
and 5 more

James Warren was the President of the Massachusetts Provincial Congress and a Paymaster General of the Continental Army during the American Revolutionary War, among other positions. He is also famous as the husband of Mercy Otis Warren and for his outspoken courage as an Anti-Federalist. General James Warren is sometimes confused with the two other Massachusetts Revolutionaries, the brothers Joseph Warren and John Warren, but they were not at all closely related, merely had similar names and views. 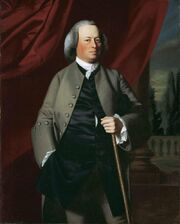