Jarvis was born in 1853 in Farmingdale, Long Island, New York.

All the children except Mary Esther Lattin were born in Farmingdale:

The family appears in the 1880 US Census living in Oyster Bay and Jarvis is listed as a "marketman". Living with him was his widowed father, Henry Lattin. Jarvis in 1880 was selling foodstuffs on the trains of the Long Island Rail Road.

Farming in Nebraska then to Black Hills of Dakota[]

Jarvis moved to Nebraska near the Niobrara River, about 20 miles from Atkinson, Nebraska. He had bought farm implements on credit, but he wasn't successful, so he could not pay for them, and they were repossessed. He next tried prospecting for gold in the Black Hills of Dakota. His daughter, Julia Ann Lattin (1880-1960) wrote: "... That left my mother alone with the children right across the river from the Indians, but they were friendly and traded many things which were allowed them from the government. I remember especially some blankets from them. They were rather dark blue with a black border. My mother used to leave the baby [in] bed [in the] morning when she had to cross a stream on a foot-log to milk her cow. One day starting back with her milk, she saw the child starting to creep across the foot log to meet her, and just in the middle of the stream the child fell overboard in the water. Mother sat her milk pail down and ran and jumped in after her, catching hold of her night dress. It was a puzzle to know how she got herself and the child on the foot log again, as the water was deep in places. Finally she managed to get her skirt off in the water and fastened the child with that until she climbed up herself. We only had a cook stove for heat, and when I was a little more than a year old, I was sitting in a high chair near the stove to keep warm and my mother was combing her hair with her head bent over when she heard a terrible scream. I had fallen on the stove. My sister (Catherine Lavinia Lattin), 1 1/2 years older had pushed the chair. My left eye had hit one of the galvanized balls on the stove leaving the skin on it, causing me to lose sight in that eye. The eye was almost closed. The doctor operated on it three times, but it did not improve the sight. I was seven years old the last operation, and they laid me right on the floor."

In 1888 Jarvis started a pickle and sauerkraut factory in Farmingdale. There were many companies already established in the area. He had a house built on the land next to the factory. The factory in 1894 was sold to Aaron Stern (1876-?) and it became the "Stern and Lattin Pickle Company" and later "Stern and Brauner". It was also listed as "Stern Pickle Products, Inc." and "Stern's Pickle Works". It was at 111 Powell Place off of Melville Road and lasted until 1985.

Harold Lawrence McPheeters (1923- ) wrote: "Jarvis Lattin was for some time a constable in Farmingdale. Someone accused him of charging too many trips to Jamaica [New York] on the Long Island Railroad, but his response was that his responsibilities included arresting 'tramps' and taking them to county headquarters in Jamaica for booking." The Brooklyn Eagle, Wednesday, June 29, 1898 reported on the inquiry: "Deputy Lattin's Bill. Oyster Bay, Long Island, June 29, 1898. One of the greatest curiosities in the form of public documents at the town clerk's office, Oyster Bay, is the bill of Jarvis A. Lattin, a deputy sheriff of Farmingdale. The bill is for less than five months services and amounts to $568. This bill came before the board for audit and a committee, consisting of Justice Simonson and Franklin and Town Clerk Long, was appointed to cut the bill down. There is talk of calling on Justice Bausch to appear before the committee with his docket that the terms may be compared."

The Isle of Pines was ceded to the United States during the Spanish-American War of 1898. The Platt Amendment defined Cuba's boundaries at the end of the war, but because the island wasn't specifically mentioned in the amendment, it was claimed by both the United States and the new Cuban government. In 1907, the United States Supreme Court made a decision on the island, declaring it belonged to Cuba. In 1909 Jarvis moved with his wife and unmarried children to the island. On Tuesday, March 23, 1909; Tuesday, August 30, 1910; and Monday, June 24, 1912, Jarvis returned to New York City from Havana, Cuba. These must have been his first trips back from Cuba where he bought land and a dry goods store near Santa Barbara on the Isle of Pines.

While in Cuba he was involved in a smear campaign against Charles Henry Grosvenor (1833-1917) who did not support having the island become part of the United States.[1]

His daughter, Julia Ann Lattin (1880-1960), wrote: "We celebrated their 50th wedding anniversary [on October 15, 1924] there, and my sister Eva, and I made them a surprise visit. They were so happy to see us. The boat made only two trips a week between Cuba and the island. We had our luggage inspected in Havana and spent one night there. It took about two hours to cross Cuba by train, and the boat was waiting for us. It was just an overnight trip to the Isle of Pines, and it was so calm there was hardly a ripple on the water. But we did experience a very bad hurricane while there. Every one boards up their windows when they see the storm approaching. After Cuba took over the island, many of the Americans left and went back to the States as my parents did." The island was formally ceded to Cuba in 1925.

Jarvis died in 1941 in Lake Helen, Florida, and is buried in Powell Cemetery, Hempstead, New York.

Jarvis and Mary Jane circa 1900 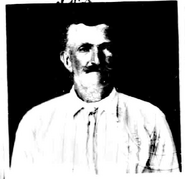 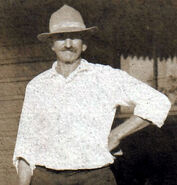 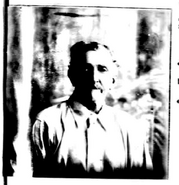 These need to be categorized: 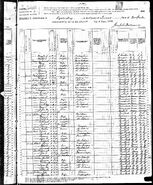 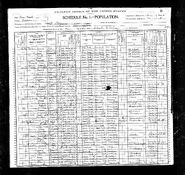 1901 lawsuit to recover money as sheriff

1916 sale to Stern and Brauner 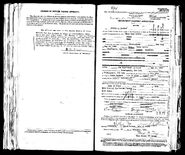 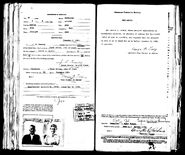 Passport application from November 29, 1920 (back with photos) 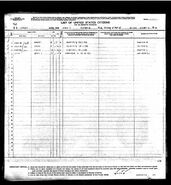 1936 Jarvis beats his wife while drunk in Florida 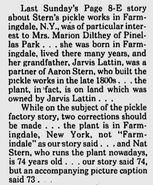 1977 article concerning Jarvis by his granddaughter