Calment became the last living documented person born in the 1870s when the Japanese supercentenarian Tane Ikai (born 1879) died on 12 July 1995. Her lifespan has been thoroughly documented by scientific study. More records have been produced to verify her age than in any other case.

According to Calment, she met Vincent van Gogh at the age of 13, when he came into her uncle's shop to buy canvas in 1888. She found him to be "Dirty, badly dressed and disagreeable."[3]

In 1896, at the age of 21, she married her double second cousin, Fernand Nicolas Calment, a wealthy store owner. Their paternal grandfathers were brothers, hence the same surname, and their paternal grandmothers were also sisters.[4] His wealth made it possible for Calment never to have to work; instead she led a leisured lifestyle, pursuing hobbies such as tennis, cycling, swimming, rollerskating, piano, and opera.[1] Fernand died in 1942 at the age of 73 after eating a dessert prepared with spoiled cherries.[5]

In 1965, at age 90 and with no heirs, Calment signed a deal to sell her apartment to lawyer André-François Raffray, on a contingency contract. Raffray, then aged 47 years, agreed to pay her a monthly sum of 2,500 francs until she died. Raffray ended up paying Calment the equivalent of more than $180,000, which was more than double the apartment's value. After Raffray's death from cancer at the age of 77, in 1995, his widow continued the payments until Calment's death.[1] During all these years, Calment used to say to them that she "competed with Methuselah".[7]

In 1985, Calment moved into a nursing home, having lived on her own until age 110.[1] Her international fame escalated in 1988, when the centenary of Vincent van Gogh's visit to Arles provided an occasion to meet reporters. She said at the time that she had met Van Gogh 100 years before, in 1888, as a thirteen-year-old girl in her father's fabric shop, where he wanted to buy some canvas, later describing him as "dirty, badly dressed and disagreeable", and "very ugly, ungracious, impolite, sick".[1][6] Calment recalled selling coloured pencils to Van Gogh, and seeing the Eiffel Tower being built.[8] At the age of 114, she appeared briefly in the 1990 film Vincent and Me as herself, becoming the oldest actress ever to appear in a motion picture.[9]

A documentary film about her life, entitled Beyond 120 Years with Jeanne Calment, was released in 1995.[10] In 1996, Time's Mistress, a four-track CD of Calment speaking over a background of rap, was released.[11] On her 122nd birthday on 21 February 1997, it was announced that she would make no more public appearances, as her health had seriously deteriorated. Jean-Marie Robine, the French demographer and gerontologist, said that this "allowed her to die, as the attention had kept her alive."[12] She died on 4 August of that same year.[10]

Both before and after Calment's death, there have been several claims to have surpassed her age (see Incomplete longevity claims) but none of them has been proven and Calment therefore continues to hold the record for the oldest verified person ever.

After her 1988 interview, at age 113, Calment was given the Guinness title "world's oldest living person". However, in 1989, the title was withdrawn and given to Carrie C. White of Florida, who claimed to have been born in 1874, although this has been discounted by subsequent census research.[13] On White's death on 14 February 1991, Calment, then a week shy of 116, became the oldest recognized living person.[14]

On 17 October 1995, Calment reached 120 years and 238 days to become the "oldest person ever" according to Guinness, surpassing Shigechiyo Izumi of Japan, whose claim (120 years 237 days old at the time of his death on 21 February 1986, Calment's 111th birthday) has since been discounted.[10] Calment was believed to have been the first person verified to have reached 115 years of age, although Augusta Holtz has since been verified to have reached this age before her.

She is also the only person verified to have lived for 120 or more years. The person who came closest to this age was Sarah Knauss of the United States, reaching 119 years, 97 days on her death on 30 December 1999.

Calment also holds the record for being the oldest living person for the longest period of time, by far – with nearly nine years and seven months, counting from the death of Florence Knapp on 11 January 1988, to her own death on 4 August 1997.

Calment's remarkable health presaged her later record. At age 85 (1960), she took up fencing, and continued to ride her bicycle up until her 100th birthday. She was reportedly neither athletic nor fanatical about her health.[8] Calment lived on her own until shortly before her 110th birthday, when it was decided that she needed to be moved to a nursing home after a cooking accident (due to complications with sight) started a small fire in her house. However, Calment was still in good shape, and continued to walk until she fractured her femur during a fall at age 114 years 11 months (January 1990), which required surgery.[4][13]

Calment ascribed her longevity and relatively youthful appearance for her age to a diet rich in olive oil[3] (which she also rubbed onto her skin), as well as a diet of port wine, and ate nearly one kilogram (2.2 lb) of chocolate every week. She also credited her calmness, saying, "That's why they call me Calment."[17] Calment reportedly remained mentally intact until her very end.[3]

"I’ve never had but one wrinkle, and I’m sitting on it."

Exceeding any other longevity case reported, Calment establishes the record as the most-verifiable supercentenarian ever recorded. Beginning with the 1876 census (Calment is listed as a one-year old), she was indexed within fourteen census documents until 1975 (conducted sometime after she celebrated her 100th birthday). She was still managing independently at the time. 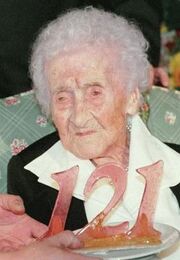