Familypedia
Register
Don't have an account?
Sign In
Advertisement
in: Pages with non-numeric formatnum arguments, Towns in Romania, Jibou, Settlements in Sălaj County

Jibou (Hungarian: Zsibó,
German: Siben) is a town in Sălaj County, Transylvania, Romania. In 2011 it had a population of 10,407. Jibou includes the town proper and other four villages: Cuceu, Husia, Rona și Var.

Jibou is 25 km northeast of the county seat Zalău; the two are linked by national road DN1H and county road DJ108A, as well as by railroad. Its major attractions are the old Wesselényi Castle, Vasile Fati Botanical Garden and the thermal baths.

Jibou is located in the northeastern part of Sălaj County, on the left bank of Someș River, at its confluence with the Agrij River. It is crossed by the 47°16′N parallel and the 23°15′E meridian.

The city is located in a Daco-Roman area and developed early as a rural settlement. The first documentary attestation of Jibou dates to 1205, under the name Chybur.[1] Among the many names Jibou bore are the titles villa (town) in 1219 and oppidum (fortified town) in 1564,[2] which attest the importance of the locality at the time. Jibou is likely older than its first documentary attestation, given that the Roman road connecting the castra of Tihău with that of Porolissum passed through its boundary. The other component localities were noted a little later: Rona in 1338, Cuceu in 1388, Husia in 1405 and Var in 1469. The development of Jibou continued in medieval times, but suffered from Turkish invasions such as those in 1610 and 1665.[1]

Jibou is well known for his participation in the Kurucz rebellion (1703–1711)[3] (see Battle of Zsibó) taken against Habsburg rule. The Wesselényi family played an important role in the evolution of Jibou, which built a castle there in 1584; today, only traces of the foundation are preserved. The construction of the current castle, the largest baroque complex in Transylvania,[4] began in 1778 and lasted more than 30 years.[5] The most prominent representative of this family was Baron Miklós Wesselényi, Jr., who lived between 1796 and 1850. He fought for the liberation of the serfs, being considered the leader of the reformist Hungarian nobility opposition, which struggled against the conservatism of Habsburg monarchy.

In 1781, his father, Miklós Wesselényi, Sr., conflicts with aulic chancellor Johan Haller, his neighbor from Gârbou.[5] On 16 October 1781, with an army of 540 people, armed "some with rifles, most with scythes, iron pitchforks, cudgels" and 12 outlaws (Romanian: haiduci),[6] Miklós Wesselényi appears at Gârbou, taking Haller by surprise, who did not expect such a gesture. As a result of this conflict, Haller sends Wesselényi to trial for six counts: "blasphemy, crooked oath, fire implementing threat, challenge to a duel, infestation and arrest of royal officials, disturbing public security".[7] The process is settled only after three years, when the very Emperor Joseph II, son of Maria Theresa, condemns Wesselényi to several years of prison at Kufstein.[6]

The last forty-eighter revolutionary army in Europe, made up of about 8,000 soldiers commanded by General Kazinczy, capitulated at the castle on 25 August 1849.

Inauguration of Dej–Jibou–Zalău railway in 1890, and over several years to Baia Mare, made Jibou to become an important railway center.[3] Through the development of industries and construction of railway the number of employees and workers increased. Nevertheless, agriculture remained main branch of the economy, especially after the introduction of alternative crops and the use of agricultural machines. To the end of 19th century in Jibou established many Jewish families, which made to increase the role of exchange of the locality. The main occupation of the Jews was trade; they opened a number of stores.

Documents of the time attested that residents here have participated in the Bobâlna uprising (1437) and the revolt led by Gheorghe Doja in 1514.[1] Locals fought oppression by outlawry and local uprisings, which have been reported both in the 17th century, and in the 18th century. During the rebellion led by Horea, Cloșca and Crișan in 1784 and during the revolution of 1848, serfs in Jibou have been with the thought and deeds by the side of other exploited inhabitants of the Transylvanian settlements, regardless of nationality. The Great National Assembly in Alba Iulia (1 December 1918) was also attended by delegates from Jibou, headed by Gheorghe Petruca. On 16 October 1944 enter in Jibou the Romanian army and liberates the locality.

In 1950, Jibou became a district seat within the Cluj Region; it lost the statute in 1960, when the district seat became Zalău. Jibou was declared a town in 1968, when a new administrative law was adopted .

According to the population census of 2011, Jibou numbered at that time 10,407 inhabitants, of which 5,141 male and 5,266 female. Decrease in population is mainly due to negative natural growth, but also emigration to other western European countries. 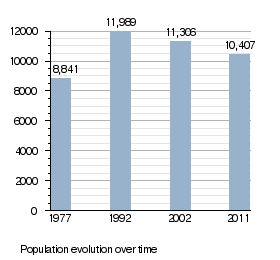 Over time, Jibou has kept its predominant agricultural and handicraft character. If before 1968 it had only one industrial unit, Red Star (Romanian: Steaua Roșie, Hungarian: Vörös Csillagot), that produced joinery articles, in the years that followed were built and expanded: the Flax Plant, the Clothing Firm, the Flax Melter, the Dairy, the Mining Company, the CFR Depot, sections of the Zalău Enterprise of Industrial Armature of Iron and Steel, Zalău Ceramics, the Forest Unit of Exploitation and Transport, the handicraft cooperatives the Craftsmen Collective and the Progress and others. After 1989, some of these economic units have ceased work, others had reprofiled, adapting in one way or another to market economy.[10] The most worrisome effect is the large number of unemployed, which is why it falls upon the general standard of living of the inhabitants.

Fertile lands in Someș meadow and terraces favored the cultivation of the main agricultural plants, but also the animals' growth. Along with acreage, appear sectors covered by deciduous forests, which complete the natural landscape.

The geographical position of the city favored the layout of a market for sale of industrial and agricultural products, but also of an animal market. There are many commercial units making a wide range of products, such as: Bujor SNC, Alfa, But Impex, Bălănean, Tora, Baciu, Paloma, Criss and Consumcoop units.[10]

In order to meet certain needs of the population, there are many units providing services, such as: Prod Fizeș, Arcada, Consomes, Tinca SRL, the Craftsman cooperative, the Progress cooperative, that perform construction, plumbing, heating and water works, carpentry, repair of household appliances, auto repair shops, etc.

Monetary circulation in the city and surroundings is provided by the CEC Bank, the Romanian Commercial Bank, the Romanian Bank for Development, the Treasury and the Credit Cooperative. In the insurance field operates the following units: Asirom, Unita, Ardaf.

Registers of the Calvin (Reformed) confessional school are run starting in 1746, but the institution is much older. State education dates from 1895. According to monographist Petri Mór, here functioned, by the late 19th century, the first kindergarten in Transylvania, with Júlia Teleki as educator.