Familypedia
Register
Don't have an account?
Sign In
Advertisement
in: Macdonald (surname), Born in 1815, Died in 1891,
and 33 more

Sir John always celebrated his birthday on 11 January, even though it was registered on 10 January. Macdonald immigrated to Upper Canada (now Ontario) with his parents in 1820, settling near Kingston. He established a law practice there and was elected to the Legislative Assembly of the Province of Canada (present Ontario and Quebec) in 1844.

In succeeding years he played a major role in transforming the old Tory party, based on narrow Loyalist and Anglican values, into a broader Conservative grouping that was willing to cooperate with French-speaking Canadians to achieve a union of all British North America. In 1857 he became prime minister of the Province of Canada. As the leader of the English-speaking Conservatives, Macdonald, with his Quebec colleague Sir George Etienne Cartier and the Liberal George Brown, formed the coalition administration (1864-67) that achieved Confederation.

Macdonald's vital role in the process of c.c.c confederation earned him the post of first prime minister of the Dominion of Canada in 1867. The Confederation originally consisted of the Province of Canada, New Brunswick, and Nova Scotia, but he succeeded in extending the limits westward by the acquisition of the Hudson's Bay Company territories in 1870 and the entrance of British Columbia in 1871; it was extended eastward when Prince Edward Island joined in 1873. Macdonald's first efforts to organize a transcontinental railway company led to his political defeat in 1873 as a result of the Pacific Scandal, but he returned to office five years later.

The Canadian Pacific Railway was chartered in 1880 and completed in 1885. Meanwhile, Macdonald launched his National Policy for strengthening Canada through protective tariffs and encouragement of western settlement. He was last elected in 1891, when the Conservatives turned back a Liberal campaign aimed at full trade reciprocity with the United States, which Macdonald feared would lead to the political amalgamation of Canada with its powerful southern neighbor. 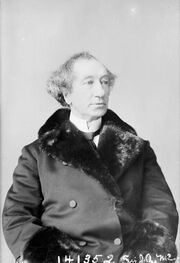