Familypedia
Register
Don't have an account?
Sign In
Advertisement
in: Spencer-Churchill (surname), Born in 1926, Died in 2014,
and 11 more

John George Vanderbilt Henry Spencer-Churchill, 11th Duke of Marlborough, JP, DL (13 April 1926 – 16 October 2014) was a British peer. He was the elder son of The 10th Duke of Marlborough and his wife, The Hon. Alexandra Mary Hilda Cadogan. He was known as "Sunny" after his courtesy title of Earl of Sunderland.

Duke of Marlborough is a title of English Peerage created by Queen Anne in 1702 for John Churchill the noted military leader. The name of the dukedom refers to Marlborough in Wiltshire. A good number of their descendants have married into many of the other noble hours of England.

Blenheim Palace, built between 1705 and 1722 for John Churchill, 1st Duke of Marlborough (1650-1722), is the principal residence for the family of the Duke of Marlborough. It is one of England's largest homes, and the only non-royal, non-episcopal country house in England to hold the title of palace. It was designated a UNESCO World Heritage Site in 1987 and is the final resting place of several members of the family.

His principal seat was Blenheim Palace, in Woodstock, Oxfordshire. He was ranked 224th in the Sunday Times Rich List 2004, with an estimated wealth of £185 million. His death was announced on 16 October 2014 by Blenheim Palace.[1]

He was educated at Eton College and served seven years in the Life Guards, in which he achieved the rank of captain. In 1972, on inheriting the Dukedom of Marlborough, he took over the management of Blenheim Palace and the Blenheim estate.

To fund the maintenance of the house, he opened it to visitors and as a film set, and established a number of businesses, including a garden furniture company and a water bottling plant.[2]

He was also active in a range of organisations, including the Thames and Chilterns Tourist Board and Oxford United Football Club. He served as vice-president of the Witney Conservative Association, the local party of David Cameron.

Marlborough was married four times and had a total of six children, two of whom died in infancy.[3]

Secondly, on 23 October 1961, he married Athina Mary Niarchos (1929-1974), former wife of Aristotle Onassis, and daughter of Stavros Livanos. They were divorced in March 1971 and had no children.

Thirdly, on 20 May 1972, he married Countess Rosita Douglas-Stjernorp, daughter of ambassador Count Carl Douglas-Stjernorp and Ottora Haas-Heye. They had three children and were divorced in 2008.[6]

Finally, at the age of 82, Marlborough married Lily Mahtani (née Sahni; born c. 1954–57 in Iran) 3 December 2008 in the Private Chapel at Blenheim.[9] There were no children from this marriage. 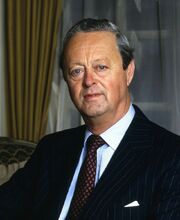