Familypedia
Register
Don't have an account?
Sign In
Advertisement
in: Morrison (surname), Born in 1907, Died in 1979,
and 44 more

Marion Mitchell Morrison (born Marion Robert Morrison / AKA: John Wayne) was for over three decades one of the most popular actors in Hollywood. His acting career got started in 1929 when a broken collarbone from a body-surfing accident abruptly ended his football scholarship as USC.

Initially working for the Fox Film Corporation, he appeared mostly in small bit parts. His first leading role came in Raoul Walsh's The Big Trail (1930), which led to leading roles in numerous B movies throughout the 1930s, many of them in the Western genre.

Wayne's career took off in 1939, with John Ford's Stagecoach making him an instant star. He went on to star in 142 pictures.

Wayne was born Marion Robert Morrison on May 26, 1907 at 224 South Second Street in Winterset, Iowa. The local paper, Winterset Madisonian, reported on page 4 of the edition of May 30, 1907 that Wayne weighed 13 pounds at birth. His middle name was soon changed from Robert to Mitchell when his parents decided to name their next son Robert. Wayne's father, Clyde Leonard Morrison (1884–1937), was the son of American Civil War veteran Marion Mitchell Morrison (1845–1915). Wayne's mother, the former Mary "Molly" Alberta Brown (1885–1970), was from Lancaster County, Nebraska. Wayne's ancestry included Scottish, Irish, Scots-Irish, and English. He was raised Presbyterian.

Wayne's family moved to Palmdale, California, and then in 1916 to Glendale, California, where his father worked as a pharmacist. A local fireman at the station on his route to school in Glendale started calling him "Little Duke" because he never went anywhere without his huge Airedale Terrier, Duke. He preferred "Duke" to "Marion", and the nickname stuck. Wayne attended Wilson Middle School in Glendale. As a teen, he worked in an ice cream shop for a man who shod horses for Hollywood studios. He was also active as a member of the Order of DeMolay, a youth organization of the Freemasons. He played football for the 1924 league champion Glendale High School team.

Wayne was married three times and divorced twice. He was fluent in Spanish and his three wives were each of Hispanic descent.

Josephine Alicia Saenz (1908-2003) - was born May 13, 1908 to the Consul General of Panama in the United States, José Saenz, a wealthy businessman who lived in Los Angeles, California. Her parents were born in Madrid, Spain.

He had four children with Josephine: 4

Esperanza Diaz Ceballos (1926-1961) was a Mexican actress, and was the second wife of John Wayne. nicknamed "Chata", she appeared in a small number of Spanish language films, both in leading and supporting roles.

Esperanza met John Wayne in 1941 in Mexico City while he was vacationing there. At the time, he was still married to his first wife, Josephine Alicia Saenz but that marriage ended December 25, 1945. Esperanza and John were married on January 17, 1946, in Long Beach, California.

Their marriage was rocky and volatile from the start because she was reportedly jealous of his devotion to his work and to his four children; they had no children of their own. "Our marriage was like shaking two volatile chemicals in a jar," Wayne said.

Pilar Pallete (1928) was a former Peruvian actress and third wife of the American actor John Wayne.

He had three more children with Pilar: 3 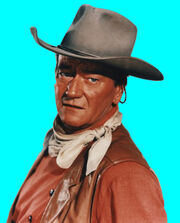