Familypedia
Register
Don't have an account?
Sign In
Advertisement
in: Ewing (surname), Born in 1815, Died in 1868,
and 2 more

John William Ewing was a nurseryman in Norwich. In the early 1840's John was living in Lakenham in a house called Shepherd's House, which was very near the Mackie and Ewing's Nursery. At this time John was in partnership with Frederick Mackie and the nursery was on Ipswich Road. The nursery in this location had been there for quite some time. It was originally established by John Mackie in the 1700s and remained in the Mackie family for many years. In 1833 when Sarah Mackie died, Frederick Mackie (her son) took over the Nursery. At some point between 1833 and 1840 he seems to have gone into partnership with John William Ewing and the business was renamed to Mackie and Ewing's. In November 1845, advertisements appeared in the Norfolk News stating that the partnership between the Mackies and John William Ewing had ended in October that year and that each party was continuing their business on their own accounts. This advertisement refers to the Eaton Nursery, so it is in 1845 that we have the earliest date of the establishment of the Ewing Nursery in Eaton. The Mackie Nursery was continued by Arthur Mackie. Frederick Mackie (a Quaker) was on a tour of Australia in 1855, where, incidentally, he got married.

It is not known exactly when John and his family moved into The Old House (known then as Shrublands) at 49 Church Lane, Eaton but the 1861 census has them living at the Ewing's Nursery on Church Lane. In the 1851 census they are also living very near here. The Old House was owned by William Creasey Ewing, John's father. William and his wife Charlotte were living on Post Office Street in central Norwich from the late 1840s until they died. In 1862 John William Ewing's parents both died within a fortnight of each other and John inherited a lot of the houses and land in the Eaton and Cringleford area. At this time the largest part of the nurseries was on the corner of Newmarket Road and Bell Road and was some 60 acres in size. This was land apparently owned by his father William Creasey Ewing. The nursery was known as Ewing's Nursery or the Eaton Nursery.

When John William Ewing died the nursery passed on to his son John Edward Ewing and his son-in-law William Child and was for a while known as 'Ewing and Child'. William Child died in 1877 but it seems likely that his involvement in the Nursery ended some years prior to that. While the business was still being run by both Ewing and Child, it started to be called The Royal Norfolk Nurseries, from as early as 1869. The business also became known as 'Ewing and Co'. John Edward Ewing closed the business down not long after 1883 (at which time there was a 'closing down sale' if you like). The nursery land in Eaton was sold in lots by Anna Elizabeth Ewing in 1884. John Edward Ewing married Alice Osborn, daughter of the well respected nurseryman Thomas Osborn of Osborn and Sons Nursery in Fulham. Incidentally the Osborn and Sons Nursery also closed down around 1882. This time was therefore the end of an era for both the Ewings and Osborns. John Edward Ewing and Alice moved to Warblington, Havant, Hampshire, around 1885/1885 and there John operated another nurseries business, "Ewing & Co, Sea View Nurseries", for at least eight years. After discontinuing that second nurseries business mid 1892, they then migrated to New Zealand.

The Old House in Church Lane, Eaton, where he lived from mid-1840s until he died in 1868. A date of 1822 appears near the entrance gate. William Creasey Ewing lived here before John.

The Cottage is attached to The Old House in Eaton and was built by John William Ewing in 1864. The initials JWE can be seen in this photo.

Close up of John William Ewing's grave in Cringleford. 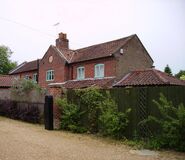 The Cottage, Church Lane, built by John William Ewing in 1864.

The backyard of The Old House where John William Ewing lived. Backs up on to the Yare River.

St. Peter's church in Cringleford where John William Ewing is buried. The family attended this church nearly every Sunday. John's grave stone can be clearly seen in the foreground.

Charles William Ewing, the second son of John William Ewing. It is thanks to a diary written by Charles in 1863/1864 that we know so much about the Ewing family life. 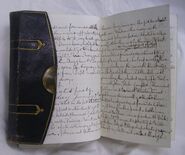 The diary written by Charles William Ewing, capturing every day of his life from July 1863 to April 1864. He mentions his Pa, Ma and siblings very often.

The Ewing Family Crest and Motto (AUDACITER, Latin for 'Boldly') as it can be seen today on the wall beside the inner gate to The Old House in Eaton, Norwich.

The 1822 date stone on the inward facing side of one of the outer gate posts of The Old House. As shown, the Ewing family crest also appears above this date stone.

The traditional/historical Ewing coat of arms. Compare crest and motto with the stones displayed at The Old House.