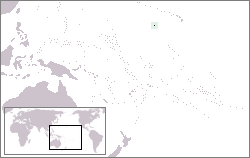 Johnston Atoll is a 130 km² atoll in the North Pacific Ocean at 16°45′N 169°31′WCoordinates: 16°45′N 169°31′W [1], about 1400 kilometers (750 nm) west of Hawaii. There are four islands located on the coral reef platform, two natural islands, Johnston Island and Sand Island, which have been expanded by coral dredging, as well as North Island (Akau) and East Island (Hikina), artificial islands formed from coral dredging.[1]

The four islands comprise a total land mass of 2.67 km².[1] Due to the atoll's tilt, much of the reef on the southeast portion has subsided. But even though it does not have an encircling reef crest, the reef crest on the northwest portion of the atoll does provide for a shallow lagoon, with depths ranging from 3-10 m.

Its climate is tropical but generally dry. Northeast trade winds are consistent and there is little seasonal temperature variation.[1] With elevation ranging from sea level to 5 m at Summit Peak, the islands contain some low-growing vegetation on mostly flat terrain and no natural fresh water resources.[1]

The island was named for Captain James Johnston who claimed its official discovery on December 10, 1807. The Johnston Atoll was claimed by both the United States and the Kingdom of Hawaii in 1858. The Atoll's guano deposits, mined by U.S. interests operating under the Guano Islands Act, were worked until depletion at about 1890.

On July 29, 1926, President Calvin Coolidge established the Johnston Atoll as a Federal bird refuge and placed it under the control of the U.S. Department of Agriculture. On December 29, 1934 President Franklin D. Roosevelt transferred control of Johnston Atoll to the U.S. Navy to establish an air station and also to the Department of the Interior to administer the bird refuge. In 1936, the U.S. Navy began developing a seaplane base, an airstrip and refueling facilities on the atoll. It was designated as a Naval Defensive Sea Area and Airspace Reservation on February 14, 1941.

Johnston Atoll was shelled by Japan in World War II. The area was subsequently a U.S. nuclear weapons test site and later the site of the Johnston Atoll Chemical Agent Disposal System (JACADS).

Between 1958 and 1975 several sounding rockets were launched from Johnston Island. There were also several nuclear missiles launched from the island in 1962 during the Operation Dominic nuclear test series, from a launchpad at 16.7370° N 169.5240° W. Afterwards, the radioactive debris and soils were placed in a 25 acre landfill on the island, along with residue from Agent Orange containers returned from Vietnam after the war.

In 1963, the Congress passed a Limited Test Ban Treaty that contained a provision known as "Safeguard C". Safeguard C was the basis for maintaining Johnston Atoll as a "ready to test" above ground nuclear testing site should atmospheric nuclear testing be deemed necessary. In 1993, Congress zero-funded the Johnston Atoll Safeguard C mission and redefined the island's military mission as the storage and destruction of chemical weapons.

The atoll has no indigenous inhabitants, although during the latter 20th century there was an average of 300 U.S. military and 1,000 civilian contractor personnel present at any given time.[1]

The central means of transport to the island was the airport which had a paved, military runway. The islands were wired with 13 outgoing and 10 incoming commercial telephone lines, a 60-channel submarine cable, 22 DSN circuits by satellite, an Autodin with standard remote terminal, a digital telephone switch, the Military Affiliated Radio System (MARS station), a UHF/VHF air-ground radio, and a link to the Pacific Consolidated Telecommunications Network (PCTN) satellite.

The atoll's economic activity was limited to providing services to U.S. military personnel and contractors located on the island. All food and manufactured goods were imported. The base had six 2.5 MW generators supplied by the base's support contractor, Holmes and Narver, using Enterprise Engine and Machinery Company (Oakland CA) DSR-36 diesel engines. The runway facility was also available to commercial airlines for emergency landings (a fairly common event)[1]. By the end of 2003 jurisdiction of the atoll was transferred from the military to the United States Fish and Wildlife Service. All structures and facilities, including those used in JACADS, were removed and the runway was marked closed.

On August 22, 2006, Johnston Island was struck by Hurricane Ioke. The eastern eyewall passed directly over the atoll, with winds exceeding 100 mph.

This article contains material from the CIA World Factbook which, as a U.S. government publication, is in the public domain.