Familypedia
Register
Don't have an account?
Sign In
Advertisement
in: Kimball (surname), Born in 1853, Died in 1938,
and 11 more

J. Golden Kimball was born in Salt Lake City, Utah, on June 9, 1853. He grew up in an unusually beautiful Utah home -- one of the many residences of his father's, Heber Chase Kimball -- that was erected in 1848-49.

Fatherless, the large Kimball family fell on hard economic times. Being the eldest child of his mother's family and feeling the need to provide income for his family, against his mother's wishes, the gangly teenager early secured a team of government freighter mules and set out to haul for the railroads, getting good pay. Most of the hauling for the railroads, however, terminated soon after the celebrated joining of the Union and Central Pacific railroads in 1869. J. Golden continued to drive wagon teams engaged in such tasks as hauling wood from the canyons, ore from the mines, etc. In short, he became a "muleskinner". He contracted jobs until he was 20, and was known for his honesty, punctuality and fairness. He also earned money by digging cellars, and was often up at 4:00 am to start his work. With almost no resources, his mother went out the second time as a pioneer, and in 1875, relocated her family in Meadowville, Rich County, Utah. Just four miles from Bear Lake near the Idaho border, J. Golden and Elias bought property from Isaac and Solomon Kimball, two of the eleven sons of Heber C. Kimball living in that territory.

They signed a note for $1,000, purchasing four hundred acres of farm and meadow land, and in that cold, northern clime established a ranch and farm. For fifteen years they followed the horse and cattle business. They were relatively successful and accumulated considerable means.

In addition to farming, the boys cut and hauled logs to help build the Logan Temple. The temperature was often 40 degrees below zero in Logan Canyon, where J. Golden said, "It was nine months winter and three months fall." The family lived in a log cabin measuring 16 by 20 feet.

J. Golden Kimball and his brother Elias S. continued as partners in business their entire lives. J. Golden recalled that from the time of his father's death and up to the fall of 1878, he was under no restraint of any kind, but was as free as the birds that fly in the air -- no man's hand was stretched out to guide him in the footsteps of his father or in the footsteps of any other man.

Two years after leaving the Academy, J. Golden Kimball was called by Church President John Taylor, during conference on April 6, 1883, to fill a mission to the Southern States.

Eight days after receiving his call he was set apart by Brother Moses Thatcher. Together with twenty-four Elders he landed in Chattanooga, Tennessee, and was appointed by President Brigham H. Roberts to labor in Virginia, where he joined his companion as a traveling Elder and labored absolutely without purse or scrip.

After laboring one year he was appointed to act as Secretary of the Southern States Mission at Chattanooga under the direction of President Roberts.

He was very familiar with the details of the martyrdom of Elders Gibbs and Berry, as well as with the mobbing, shooting at and whipping of "Mormon" Elders during the year 1884.

During the last year of his mission his health and constitution were broken; he was troubled with malaria, which continued to afflict him for many years. In the spring of 1885 he received an honorable release, and returned to Utah via New Jersey, where he preached, and visited his mother's relatives.

J. Golden Kimball, together with Newel Kimball and Elias Kimball, entered into the farm implement business under the name of "Kimball Brothers", establishing places of business at Logan, Utah and Montpelier, Idaho. They signed promissory notes for over thirty thousand dollars. They labored hard for four years, and completely lost their investment, but saved their good name and paid their debts.

They decided to exchange their Bear River Valley ranch for Cache Valley property, and used the proceeds from the sale of their cattle and horses to invest in real estate. There was a real estate boom underway, and they were not yet convinced of the danger of speculation. They bought almost every property that was for sale.

Kimball was acting as the senior President of the Seventy when he was killed in 1938, at the age of eighty-five, in a single-vehicle automobile accident in the Nevada desert 50 miles east of Reno. He was buried at Salt Lake City Cemetery. 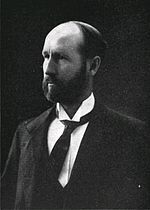