Just after returning from his mission in 1901, Smith began work in the office of the Church Historian and Recorder. He was the acting recorder of the general conference in 1910 when he was called as an apostle. Prior to his call as a general authority Smith served as the secretary and treasurer of the Utah Genealogical Society. In 1921 Smith assumed the office of Church Historian and Recorder which he held until 1970.

Smith spent most of his time as an apostle living in Salt Lake City. He also was president of the Salt Lake Temple from 1945 to 1949. During this time, Smith was sent on a tour of the Spanish-American Mission of the church. Before his return to Salt Lake he informed the president of the Arizona Temple that he would recommend to the First Presidency that the temple ceremonies be translated into Spanish.

Smith served as president of the Genealogical Society of Utah and its successor the Genealogical Society of The Church of Jesus Christ of Latter-day Saints from 1934 to 1961. At the time of his release from this position he had already been president of the Quorum of the Twelve for over a decade. During the late 1950s, Smith attempted to reduce staff turnover at the Society by trying to convince the First Presidency that women should be permitted to stay on as employees after they married. However, Smith was only able to get a change to allow them to work six months past marriage.

Smith married his first wife, Louie Emily "Emyla" Shurtliff (born June 16, 1876) on April 26, 1898. In March 1899, church president Lorenzo Snow called him on a mission to Great Britain, which he completed (May 1899 - July 1901), leaving Louie in Salt Lake City. On May 12, 1899, Smith was set apart as a missionary and ordained a seventy by his father. A small group of missionaries, including Smith and his older brother, Joseph Richards Smith, left the next day for England. After his return from the British mission, Smith and his wife had two daughters, Josephine and Julina. Louie died of complications of a third pregnancy on March 28, 1908.

Ethel had specifically requested that Jessie Ella Evans (1902-1971), an accomplished contra-alto opera singer, sing at her funeral. Evans, born to Jonathan Evans and Janet Buchanan Evans, had joined the Mormon Tabernacle Choir in 1918, was a member of the American Light Opera Company (1923–27), and was the Salt Lake County Recorder. In November 1937 Evans and Smith were engaged to be married.

In April 1938, Smith married Evans in the Salt Lake Temple. The marriage was performed by Heber J. Grant. The couple had no children. Jessie died on August 2, 1971. 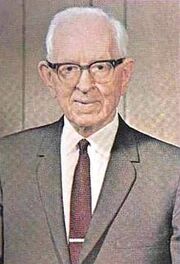