Familypedia
Register
Don't have an account?
Sign In
Advertisement
in: Abbott (surname), Born in 1842, Died in 1901,
and 10 more

Joseph Palmer Abbott was born on 29 September 1842 at Muswellbrook, New South Wales, to John Kingsmill Abbott, a squatter, and his wife Frances Amanda, née Brady. Abbott was educated at the Church of England school at Muswellbrook, moving to John Armstrong's school at Redfern at 9 years of age, then to J. R. Huston's Surry Hills Academy and finally to The King's School, Parramatta.[1]

Upon completion of his education in 1857, he returned to the family station "Glengarry", near Wingen on the Upper Hunter, where his mother had gone from Muswellbrook in 1847 upon the death of his father.[1]

Abbott was admitted as a solicitor in 1865, and practiced law in Murrurundi, specialising in land cases. He was appointed a commissioner of the Supreme Court of New South Wales, for the district of Maitland.

Founding a firm, Abbott & Allan in Sydney, Abbott established himself as an expert in property and land law.

He was a director, and later chairman, of the Australian Mutual Provident Society.[1][2]

Abbott was elected to the New South Wales Legislative Assembly as the member for Gunnedah on 29 November 1880, and later for Wentworth on 26 February 1887 which he served until he retired from parliament on 11 June 1901.

He was briefly the leader of the Opposition for the Free Trade Party, but resigned soon afterwards, after a disagreement about the party's merge with the Protectionist Party.[1][2]

Abbott was elected Speaker of the Legislative Assembly in 1890 and has a reputation as an authority on parliamentary procedure. He also imposed dignified control over the formerly unruly Assembly. He resigned the Speakership in 1900.

He was known for his work involving property laws of Australia, and as a New South Wales delegate for the Federation Conventions of 1891, 1897, and 1898 where he was Chairman of Committees. He created the 1881 Hospital Acts Amendment Act, which lead to him becoming an honorary governor of several medical facilities. In January 1883, Abbott became the secretary of mines for Premier Sir Alexander Stuart's ministry. After a ministry reconstruction by Sir George Dibbs in 1885, Abbott became the secretary of lands.

Abbott was born in Muswellbrook in New South Wales, and was the son of John Abbott and Frances Amanda (née Brady). Attending the Church of England school in Muswellbrook, he later became a devout member for the church.

He was initiated as a Freemason in 1864, and served as Grand Master of the United Grand Lodge of New South Wales from 1895 to 1899.[2] Abbott, along with many other politicians, was a member of the Australian Club and Union Club.

He was knighted in 1892. For his services towards Australian law and politics, he was made a Knight Commander of the Order of St Michael and St George in 1895. 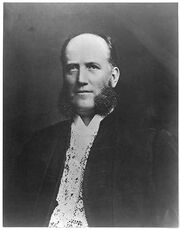