Familypedia
Register
Don't have an account?
Sign In
Advertisement
in: Abbott (surname), Born in 1891, Died in 1965,
and 9 more

Abbott was born in North Sydney, New South Wales, son of Joseph Palmer Abbott, and educated at The Armidale School and the University of Sydney, where he graduated with a Bachelor of Arts in 1913. He enlisted in the Australian Imperial Force in February 1915 and served at Gallipoli. He was invalidated to England in October 1915 where he was discharged from the AIF so that he could join the Royal Field Artillery of the British Army in December 1915. In September 1918, he was awarded a Military Cross on the Western Front for putting out a fire. After the war, he became a farmer near Wingen and in 1924, he married Katherine Bliss Wilkinson. He became president of the Graziers' Association of New South Wales in 1935 and was president of the Graziers' Federal Council of Australia in 1937 and 1938.[1]

Abbott was elected as a Country Party member for the Australian House of Representatives seat of New England in the 1940 election. He was appointed to the new porfolio of Home Security in the Menzies ministry in June 1941 and was responsible for civil defence until the fall of the Fadden government in November 1941. In 1942 he was appointed chairman of the Administrative Planning Committee, which was responsible for organising supplies for the United States forces in Australia during World War II. He retired from parliament prior to the 1949 election.[1]

Abbott was appointed an Officer of the Order of the British Empire (OBE) in 1951. He died in the Sydney suburb of Camperdown, New South Wales and was survived by his wife and a son.[1] One of his half-brothers, Mac Abbott, was the member for Upper Hunter in the New South Wales Legislative Assembly from 1913 to 1918 and a Senator from 1935 to 1941.[2] 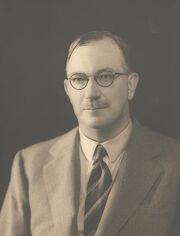