Early President of RLDS Church, Son of the Mormon Prophet

Eldest surviving son of Joseph Smith, Jr., founder of the Latter Day Saint movement, and Emma Hale Smith. Joseph Smith III was the Prophet–President of what became known as the Reorganized Church of Jesus Christ of Latter Day Saints, now called Community of Christ, which considers itself a continuation of the church established by Smith's father in 1830. For fifty-four years until his own death, Smith presided over the church. Smith's ideas and nature set much of the tone for the church's development.

Joseph Smith III was born in Kirtland, Ohio on November 6, 1832 to Joseph Smith, Jr. and Emma Hale Smith. He moved with his parents to Far West, Missouri in 1838, where his father was arrested partially as a result of the events in the 1838 Mormon War. Young Joseph was able to stay overnight with his father in prison on several occasions. It was later alleged by fellow prisoner and church apostle Lyman Wight that during one of these visits, Joseph Jr. laid his hands upon Joseph III's head and said, "You are my successor when I depart." While his father was still imprisoned in 1839, Joseph III left Missouri with his mother and siblings and moved to Quincy, Illinois and later to the new settlement of Nauvoo. The elder Smith escaped custody later that year and rejoined the family.

At Nauvoo, the Latter Day Saints created a militia known as the Nauvoo Legion and soon afterward, 500 of the town's boys created their own junior version of the militia. Joseph III became general of the boys' militia whose motto was, "our fathers we respect, our mothers we'll protect."

According to later reminiscences, Joseph III was blessed by his father at a special council meeting of church officials held in the second floor of the Smith family's Red Brick Store in Nauvoo. By some accounts, participants also included Hyrum Smith, John Taylor, Willard Richards, Newel K. Whitney, Reynolds Cahoon, Alpheus Cutler, Ebenezer Robinson, George J. Adams, W. W. Phelps, and John M. Bernhisel. Joseph III's father reportedly seated him in a chair and Whitney anointed his head with oil. Then the elder Smith reportedly pronounced a special blessing upon his son's head that suggested that Joseph III would succeed him as church president if he lived righteously.

Joseph Smith, Jr. was assassinated at Carthage, Illinois when Joseph III was 11 years old. Although many Latter Day Saints believed that Joseph III should succeed his father, his young age in 1844 made that impractical. A succession crisis ensued which resulted in Brigham Young taking lead of the majority of church members as president of the Quorum of the Twelve Apostles. Young and the majority of the Latter Day Saints departed Nauvoo in 1846, leaving the Smith family in a mostly empty city. Smith's mother Emma attempted to make a living renting out rooms in the family home; in 1847, Emma married a second husband named Lewis Bidamon.

Joseph Smith III began to study and eventually practice law. In 1856, he married Emmeline Griswold and the couple moved into a house that was his parent's first residence in Nauvoo. Emmeline died in 1869 and Joseph promptly remarried that year year to Bertha Madison. The 1870 and 1880 US Census shows them living in Plano, Illinois. When Bertha died in 1896, Joseph married to Ada Rachel Clark.

In the late 1840s and early 1850s, the bulk of the Latter Day Saints either aligned themselves with Brigham Young and emigrated to Utah or they remained in the Midwest and looked to James J. Strang as church president. Strang gave indications that he believed that a son of Joseph Smith, Jr. would one day lead the church and made overtures to the Smith family. Emma and her sons, however, remained aloof. Many midwestern Latter Day Saints were adamantly opposed to plural marriage and when Strang began to openly practice the doctrine in 1849, several key leaders including Jason W. Briggs and Zenas H. Gurley, Sr. broke with his leadership. Later, when Strang was mortally wounded by assassins, he refused to name a successor, and when he died he left his church leaderless.

The midwestern Saints began to call for the need to establish a "New Organization" of the church and many believed that Joseph Smith III should be its head. Latter Day Saints repeatedly visited Smith and asked him to take up his father's mantle, but his reply was that he would only assume the church presidency if he were inspired by God to do so. Finally, in 1860, Smith said that he had received this inspiration and at a conference in Amboy, Illinois on April 6, 1860, he was sustained as President of the Church.

As church president, Smith's was what his biographer has called a "pragmatic prophet." Many of the followers of the Reorganized Church were, in fact, dissidents from what they felt were the excesses of a theocracy established by Smith's father, and which they also felt were continued under Brigham Young in Utah Territory. From the start, Smith attempted to steer a middle course. Rather than deny the later teachings of Smith's father, such as baptism for the dead, the divinity of the Book of Abraham and the concepts of "eternal progression" and the "plurality of gods," Smith taught that these doctrines either were never officially accepted, were misinterpreted, or should simply not be emphasized. However, Smith repeatedly taught that his father did not teach or practice plural marriage and that this practice was an invention of Young and his followers. Smith also resisted calls from his followers to announce a new gathering place or to quickly "redeem" and build up "Zion" (Independence, Missouri).

In Smith's final years, members of the church began to move to Independence, Missouri, which Joseph Smith, Jr. had designated as the "center place" of the "City of Zion." Many Latter Day Saints had wanted to return to this theologically important ground since their expulsion in 1839. In 1906, at the age of 73, Smith moved to Independence and entered a state of semi-retirement. His eldest son, Frederick Madison Smith, remained in Lamoni and took over active leadership of the church. Finally, on December 10, 1914, at the age of 82, Smith suffered a heart seizure in his home and died. He had been president of the church for more than fifty years and he was admired and mourned by thousands.

Joseph Smith III began to study and eventually practice law. In 1856, he married Emmeline Griswold and the couple moved into a house that was his parent's first residence in Nauvoo.

This Csnsus shows Joseph Smith III married to his second wife and that family living in the household of the Vincent Hohm Family (from Germany). Taken in Little Rock, Kendall County, Illinois, 12-July-1870.

Taken in Plano, Kendall County, Illinois, 16-June-1880. His occupation refers to his church presidency position and editor of church publication. Several boarders live with the family. All children listed born in Illinois. 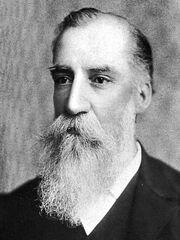