Julia Murdock Smith.   Adopted at childbirth by the Mormon Prophet, Joseph Smith and his wife after the death of their of the own infant twins.  She is listed as his oldest surviving child to reach adulthood.

Her birth mother died giving birth to Julia and her twin brother Joseph, so their birth father John Murdock offered them to Joseph Smith (1805-1844), the Mormon Prophet (and a close friend) and his wife, Emma Hale (1804-1879), who themselves had lost prematurely twins born just a couple of days earliers (30-Apr-1831).

Eleven months later, (late March 1832), the infant Joseph became ill. Consequently Emma decided to have the babies sleep separately to prevent a spread of the disease. Joseph Smith had taken baby Joseph to bed with him and Emma was in the other room with Julia. That night a mob came and stormed the Smith home. In the midst of the panic, baby Joseph was exposed to the cold air and died several days later.

12 November 1838 Letter from Joseph at Liberty Jail written to Emma. First part of letter mentions trials at the jail, second part asks Emma to relay instructions to their children:

rejoice that we are counted worthy to be persicuted for christ sake, tell little Joseph, he must be a good boy, and Father loves him <with> a perfect love, he is the Eldest must not hurt those that <are> smaller then him, but cumfort them tell little Frederick, Father, loves him, with all his heart, he is a lovely boy. Julia is a lovely little girl, I love her also She is a promising child, tell her Father wants her to remember him and be a good girl, tell all the rest that I think of them and pray for them all. Br Babbit is waitting to carry our letters, for us the colonal <price (Sterling Price)> is inspecting them therefore my time is short <the> little baby Elexander <Alexander> is on my mind continualy Oh my affectionate Emma, I want you to remember that I am <a> true and faithful friend, to you and the chilldren, forever, my heart is intwined around you[r]s forever, and ever, Oh may God bless you all amen. you I am your husband and am in bonds and tribulation &c.

After the death of Joseph Smith, Jr., Julia and her surviving four brothers remained in Nauvoo, Illinois with their mother Emma. In 1848, at seventeen, Julia eloped with an older man Elisha Dixon, and the couple married in St. Louis, Missouri. In 1851, Dixon was injured while employed on a steamboat. He died, probably in 1853, as a result of these injuries.

Julia returned to Nauvoo and lived with her mother until November 19, 1856, when she married John J. Middleton. The couple bought a small farm in Sonora township, located just east of Nauvoo. Middleton was a devout Catholic, and Julia was baptized into the Catholic Church on November 9, 1857. Sometime after 1860 they moved to St. Louis.

In 1876, Julia permanently left her husband and moved back to Nauvoo. She lived with her mother at the Riverside Mansion, the brick home Emma's second husband Major Bidamon had built. Emma’s health failed early in 1879, and Julia was with her, as were Joseph III and Alexander, when she died on 30 April 1879.

Sometime in 1880 she was diagnosed with breast cancer. She spent her final months boarding with the James Moffitt family living near her homestead in Sonora, Il. She died there at age forty-nine on September 12, 1880.

MIDDLETON—At the residence of Jas. Moffitt Jr. in township, Set. 10th 1880, Mrs. Julia, wife of John Middleton, in her 50th year, of cancer. The deceased was born at Warrensville, O., in May, 1831, and many phases of her life from almost the day of her birth have borne as near the sembalance of romance as facts could well admit of, which, it will not be a miss to mention here. She was a twin, and the daughter of a Mr. and Mrs. Murdock of the above named place, who were neighbors of Joseph and Emma Smith of subsequent Mormon fame. Within a few hours of the birth of the Murdock twins Mrs. Smith also became the mother of a pair of twins, which shortly died. Mrs. Murdock also died, when Mr. and Mrs. Smith took and adopted her twins. Some time after that one of the adopted children died. Julia continued to live in the Smith family and came here with them at the time of the Mormon immigration. She was kindly cared for and educated by the Smiths and at the age of seventeen engaged to marry a man named Dixon, which met the objection of her foster-mother—Mr. Smith having been killed before that time. But as in most of other cases, where love yields not to dictation, she left home and married the man of her choice. But after a few years she was compelled to wear the weeds of widowhood—her husband died—when she returned home where she remained till her marriage with Mr. John Middleton in 1856.

Mrs. Middleton was a woman of the most exemplary character—an advocate of all the graces and virtues and had a strong loving disposition for her friends which firmly endeared her to them. She was considerably above the medium of intelligence and of an indomitable spirit which fully manifested itself in the trying ordeal of sickness through which she passed before the severance of the link which bound her to this earthly sphere. Although she knew that death was fast approaching she remained cheerful and resigned. She leaves many friends who deeply regret her death." — Nauvoo Independent, September 17, 1880.

Living on farm in Sonora township, located about 4 miles east of Nauvoo, with second husband.

This census was taken on 18 June 1880 barely 3 months prior to Julia's death. She is found living with the Moffit Family in Sonora township, Hancock County. Details of the census lists her as a boarder suffering from 'cancer of breast'. 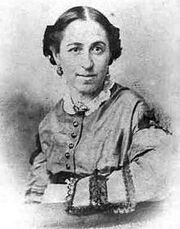