Kenneth Doty was born on his father's farm, located at 4001 Doty Road, Woodstock, Illinois, where he lived all his life. He attended a one-room rural elementary school where eight grades were taught by a single teacher. He was a bright student who completed eight grades in seven years, graduating in a class of two students. He attended Woodstock Community High School in Woodstock, Illinois, where he studied Latin and other college preparatory courses. He graduated from high school in 1933 at the height of the Great Depression, when he and his parents could not afford to realize his hope of attending the University of Illinois. The farm was heavily mortgaged and Kenneth agreed to remain on the farm to help pay off the debt. Not only was the debt gradually retired, but Ken and his father were eventually able to purchase a neighboring farm, doubling the size of the farm to 400 acres. His motto was "make haste slowly".

Ken met his future wife Doris Hunt in Conklin's grocery store in Woodstock where she worked. At first Doris was put off by the attention he showed her because she mistook his high school class ring, which he wore with the crest turned toward his palm, for a wedding band. Ken and Doris dated during her training as a nurse at Sherman Hospital in Elgin, Illinois. Upon her graduation they were married and Doris moved in with Kenneth and his parents. The following year their first child, Dennis, was born and Ken built a house for his parents in a woods on the farm near the intersection of Doty and Lucas Roads. Doris and Ken added a second son, Rodney, to their family in 1950, and a daughter, Diane, in 1952. Ken and Doris were instrumental in getting 80 of their neighbors to form the Ridgefield Grange on September 11, 1953, and Ken was elected its first master. On October 22, 1954, Ken lost his right thumb in a cornpicker accident. The members of Richfield Grange turned out to finish Ken's corn harvest while he was recovering. For most of his adult life Ken was a member of the Green's Livestock bowling team in the Monday night league at the bowling alley in Woodstock. After his accident Ken experimented with a variety of bowling balls drilled with special holes and slots to accomodate his loss of a thumb, and was ultimately successful in completely recovering his bowling ability. Ken and Doris were members of the First Methodist Church in Woodstock, Illinois, where they attended services almost every Sunday with their chuildren and Ken's mother. In the mid-sixties Ken sold his dairy and converted his barn to hog production. He also added a large addition to his house about this time, doing most of the design and construction himself. In early March of 1970 Ken and Doris realized their long-time dream of vacationing in Hawaii, stopping on the return trip to visit their son Rod in Los Angeles, where he was a student at the University of Southern California.

In late July, 1972, Ken was stricken by a severe heart attack. On August 3 while Ken was still in the hospital, Doris died at home in bed from a cerebral hemorrhage. Ken grieved deeply and his recovery was slow. The members of Ridgefield Grange again came to his aid by harvesting what would be his last crop of corn. That fall his daughter Diane married Dale Brown and the couple moved in with Ken. The following spring Ken arranged the sale of his farm, except for a few acres containing his house and buildings. On May 14, 1973, Ken was hospitalized suffering from a kidney stone. Early the next morning he died in the hospital from a heart attack.

Doris and Ken at about the time of their wedding. 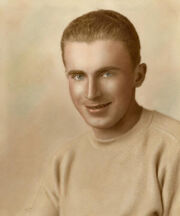