Familypedia
Register
Don't have an account?
Sign In
Advertisement
in: Rurik (surname), Born in 1186, Died in 1238,
and 9 more

Prince of Novgorod
Prince of Rostov
Grand Prince of Vladimir

Konstantin Vsevolodovich the Wise, Rurik of Rostov, Prince of Novgorod, Prince of Rostov, Grand Prince of Vladimir, was born 18 May 1186 in Rostov, Rostov Rayon, Yaroslavl Oblast, Russia to Vsevolod III Yuryevich of Vladimir (1154-1212) and Mariya Shvarnovna of Ossetia (1155-1205) and died 2 February 1238 of unspecified causes. He married Mariya Mstislavna of Smolensk (c1187-1220) 15 October 1196 JL .

Konstantin Vsevolodovich was the eldest son of the Grand Prince of Vladimir Vsevolod Yuryevich Bolshoy Gnezdo . Already whan he was only ten years old [2] his father married him in Vladimir to Mariya Mstislavna, the daughter of Prince of Smolensk Mstislav Romanovich [3] (in monasticism - Agafia, died January 24, 1220). Until 1205, he was with his father, present as a representative of the latter, with the consecration of churches in Vladimir and participating in 1198 in the campaign against the Don to Polovtsians . At the end of the 1190s reigned for a short perios in Pereyaslavl-South .

In March 1205 he was sent by the father to the reign of Novgorod to the place of his brother Svyatoslav, where he stayed until the beginning of 1208 [4], but spent most of his time not in Novgorod, but in Vladimir and Rostov. Then he, having gathered the Novgorodians, Pskovites, Ladozhans and Novotorgians, came with them to Moscow to assist his father in the campaign against Ryazan and in the siege of Pronska .

After a while, his father gave him Rostov as a destiny and five cities in addition: Yaroslavl, Beloozero, Moluga, Uglich and Veliky Ustyug [2][5]. In his absence in 1211, almost all of Rostov was burnt, and he, upon learning of this, immediately returned to him from Vladimir, where he went to see his father. As a native of Rostov and a man who lived there for a long time, he tied with his homeland not only a moral connection, but also imbued with its political ideals, seeking both the seniority of Rostov in front of Vladimir, and the political indivisibility of the entire Rostov-Suzdal land . Meanwhile, the Novgorodians took to themselves the reign of the prince of the Toropets Mstislav ; As a result, Constantine and his brothers came to Torzhokagainst Novgorod. The matter, however, ended without bloodshed.

In 1211, when his father "began to succumb", he sent to Rostov for Prince Konstantin, in order to "bless" his great principality Vladimir, and Rostov to give his brother Yuri . Prince Konstantin refused to go to Vladimir and pass Rostov, contending that he, as the eldest son, has the right to the entire Grand Duchy. After a three-fold invitation, Vsevolod called for Bishop John, the clergy and laymen of all ranks and states, and forced them to swear allegiance to Yuri Vevolodovich, as his successor in grand dignity, bequeathed to him by Vladimir and Suzdal, and to Konstantin by Rostov and Yaroslavl .

The struggle for power

In 1212 Vsevolod died and a struggle broke out among the brothers; their younger brothers went over to the side of one or the other of their older brothers. Konstantin, relying on the right of the elder in the family, began to solicit great reign, and Yuri, wishing to finish the world, yielded to him Vladimir, and Rostov himself asked for him, but Konstantin did not agree, wanting to take both Rostov and Vladimir, and send Yuri to Suzdal. At the congress in Yuriev, Konstantin and Yuri reconciled, but in 1213 Konstantin again decided to go to Yuri, who, however, warned him, himself approached Rostov, burned a lot of settlements here, but the bloody battle on the Ishna river ended in vain; Soon the brothers made peace, but in 1216 they again began the struggle. In 1215, Yaroslav Vsevolodovichspoke against Novgorod for the fact that the latter took to himself the reign of Mstislav Udalogo ; Constantine at first took the side of his brother, but then Mstislav attracted him to his side by promising to deliver him a grand table. In the Battle of Lipitsa (1216) : Yaroslav and Yuri fled, and Konstantin entered Vladimir, led the inhabitants to the cross, reconciled Yaroslav with Mstislav, Yuri gave Gorodets Radilov on the Volga.

Having become Grand Princes of Vladimir-Suzdal he did not break, however, ties with Rostov, spending most of the time here, laying down the cathedral church and leaving behind many other monuments, and, by the way, the library that continued to grow with his son Vasilko. The chroniclers call Constantine "blessed," adorned with "all good morals," not overblown by his "empty glory of this beautiful light," "second Solomon»; they convey that he "all his mind" in the "ageless, endless life", which "both with his alms and great indifference", indicate his truthfulness, generosity, gentleness and humility, his concerns about the creation of "beautiful God's churches, which he decorated with "wonderful" icons and supplied with books, praise him, that he "honored the measures of priestly and mysterious rank" and so on. Constantine received the nickname "Wise": he owned several languages, he loved books "more than any estate" and collected, "sparing no fortune" (in his library there were only more than a thousand Greek manuscripts), valued art, kept "learned men" engaged in translations from foreign texts. [6]

Prince Konstantin had three sons: Vasilko, Vsevolod and Vladimir. In 1217, Konstantin, feeling a quick death and fearing the fate of young children, called his brother Yuri Gorodets, bestowed many gifts on him, and appointed Vladimir after his death, but for the time being he gave Suzdal, swearing he would be a father to his nephews, Rostov to Vasilko, Yaroslavl to Vsevolod, and Uglich to Vladimir. Prince Konstantin died on February 2, 1218, causing universal sorrow among the people; the chronicle says: "We wept with great mourning, - boyars, like the patrons of their land, servants, as servants and gentlemen, miserable and black ones, as their consolation and the garment of their nakedness."

The foundation of the Grigorievsky shutter within the walls of the Yaroslavl Spassky Monastery as an educational institution. Thus, the Grigorievsky shutter, perhaps, is the first educational institution in the North-East of Russia. There is a suggestion that Constantine transferred the spiritual school to Rostov in 1214, presumably it was located on the territory of the present metropolitan garden in the Rostov Kremlin.

Maria Shvarnovna , the Princess of the East

↑ According to the study of NG Berezhkov [1], 1185, the full date of May 18, Saturday, and according to the context of the annals, and according to the calendar - indicates 1185 as the year of Constantine's birth. ↑ Jump up to: 1 2 Pleshanov EV Prince Konstantin Vsevolodovich Rostovsky // History and culture of the Rostov land , 2001 (conference materials). - R.N / D. , 2002. P. 78-85. ↑ Thanks to the laying of sewerage, the name of the first Yaroslavl princess became known - Polit.ru ↑ On February 9, Svyatoslav, who replaced him, arrived in Novgorod. [2] ↑ Nasonov AN "Russian land" and the formation of the territory of the ancient Russian state - M. , 1951. P. 194. Note. 1. ↑ Maslenitsyn S.I. Yaroslavl icon painting. 2nd ed. dorab. - M. , Art, 1983. ↑ Seal of Mary. Archaeologists have learned the name of the mother of the first prince of Yaroslavl. Russian newspaper Sources [ edit | edit source ] Vinogradov A. Rostov and Belozersky appamage princes // Russian Biographical Dictionary : in 25 volumes. - St. Petersburg. - M. , 1896-1918. Konstantin Vsevolodich Wise . On the site " Chronos " . 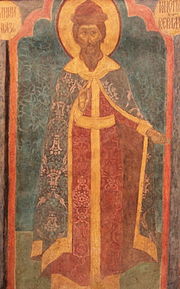