Familypedia
Register
Don't have an account?
Sign In
Advertisement
in: Pages with broken file links, Kursk Oblast, Established in 1934

The oblast occupies the southern slopes of the middle-Russian plateau, and its average elevation is 177–225 meters (580–738 ft). The surface is hilly and intersected by ravines. The central part of Kursk oblast is more elevated than the Seym Valley to the west. The Timsko-Shchigrinsky ridge contains the highest point in the oblast at 288 meters (945 ft) above the sea level. The low relief, gentler slopes, and mild winter make the area suitable for farming, and much of the forest has been cleared.

Kursk Oblast contributes to two major drainage areas: the Dnieper River and the Don River (78% and 22% respectively). There are 902 rivers and streams in the oblast, with their total length of approximately 8,000 kilometers (5,000 mi). Major rivers are the Seym and the Psyol.

The inland waters of Kursk oblast consist of 145 artificial lakes and about 550 small ponds.

Kursk Oblast is one of the nation's major producers of iron ore. The area of Kursk Magnetic Anomaly has one of the richest iron-ore deposits in the world. Also, rare earths and base metals occur in commercial quantities in several locations. Refractory loam, mineral sands, and chalk are quarried and processed in the region. Oblast's sufficient reserves of artesian well water are proving useful for medical purposes.

The oblast's location at the center of the European part of Russia gives the region a medium continental climate: warm summers and relatively mild winters. In July, the average daytime high temperature is +19.3 °C (66.7 °F). In January the average high is −8.6 °C (17 °F). The average number of frost-free days ranges from 150 in the north to 160 in the south. The growing season in Kursk Oblast varies, from 180 days in the north to 195 days in the southwest. The average annual precipitation for the oblast is 584 millimeters (23.0 in), but it ranges from 634 millimeters (25.0 in) in the northwest, to about 500 millimeters (20 in) or less in the southeastern corner. The maximum of the rain falls during June and July. The snow depth in Kursk Oblast differs considerably, from 300–400 mm (12–16 in) in the north of the oblast, to 150–250 mm (6–10 in) in the south. Annual sunshine is 1775 hours.

Kursk Oblast is a part of the Eastern European forest-steppe. One-quarter of Kursk oblast was once heavily wooded. Hardwood timbers included oak, ash, and elm. Now forests cover only 10% of the oblast. Animals native to the area are numerous. Pike, bleak, and perch are abundant in local rivers. Otter and badger, as well as wild boar, red deer, and roe deer remain numerous in many parts of the area.

The oblast is administratively divided into five cities and towns under the oblast's jurisdiction (Zheleznogorsk, Kursk, Kurchatov, Lgov, and Shchigry), twenty-eight rayons.[12] Another five towns (Kargopol, Mezen, Nyandoma, Shenkursk, Solvychegodsk, and Velsk) have the status of the towns of rayon significance. 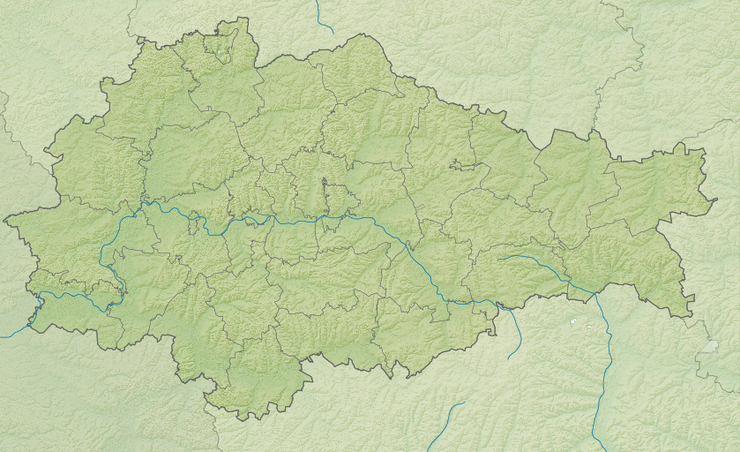 According to the 1897 census, there were 77.3% Russians and 22.3% Ukrainians in the Kursk Governorate.[18] The 1932 forced end to Ukrainization in southern Russia (Soviet Republic) led to a massive decline of reported Ukrainians in these regions in the 1937 Soviet Census compared to the 1926 First All-Union Census of the Soviet Union.[19]

According to a 2012 survey[20] 68.7% of the population of Kursk Oblast adheres to the Russian Orthodox Church. In addition, 24% of the population declares to be "spiritual but not religious", 4% is atheist, and 3.3% follows other religions or did not give an answer to the question.[20]

Although territory of Kursk Oblast had been populated since the end of the last Ice Age, information about the area was scanty until 1596 when the Kursk stronghold was built. The Kursk Oblast was part of the Grand Duchy of Lithuania under the Jagiellonian dynasty. It was lost in the Muscovite–Lithuanian Wars to the Duchy of Moscow. A real growth of the area around Kursk began soon after that, with a large migration from Central Russia after famine in the beginning of the 17th century. Between 1708 and 1719, Kursk was a part of the newly created Kiev Governorate. From 1719 to 1727 it was a part of Belgorod province of Kiev Governorate. Later Kursk uyezd was a part of Belgorod Governorate. On May 23, 1779, Kursk Governorate was established. The latter subdivision existed until 1928, when the territory of Kursk Governorate became a part of Central Black Earth Oblast. As Central Chernozem Oblast was very large its administration was very difficult, on June 13, 1934 it was divided into two oblasts: Kursk Oblast and Voronezh Oblast. In the period between 1934 and 1954, oblasts' borders were frequently adjusted. However, the area and borders of the oblast have remained stable from 1954.

During World War II, the territory of Kursk Oblast was occupied by the German troops from fall of 1941 until summer of 1943. The Battle of Kursk, which was one of the major battles of World War II, took place in the region between July 5 and August 23, 1943.

During the Soviet period, the high authority in the oblast was shared between three persons: The first secretary of the Kursk CPSU Committee (who in reality had the biggest authority), the chairman of the oblast Soviet (legislative power), and the Chairman of the oblast Executive Committee (executive power). Since 1991, CPSU lost all the power, and the head of the Oblast administration, and eventually the governor was appointed/elected alongside elected regional parliament.

The Charter of Kursk Oblast is the fundamental law of the region. The Kursk Oblast Duma is the province's standing legislative (representative) body. The Legislative Assembly exercises its authority by passing laws, resolutions, and other legal acts and by supervising the implementation and observance of the laws and other legal acts passed by it. The highest executive body is the Oblast Government, which includes territorial executive bodies such as district administrations, committees, and commissions that facilitate development and run the day to day matters of the province. The Oblast administration supports the activities of the Governor who is the highest official and acts as guarantor of the observance of the oblast Charter in accordance with the Constitution of Russia.

The center-right pro-government United Russia Party and the left Communist Party of the Russian Federation are Kursk Oblast's major political parties. Traditionally, the Communist Party is the strongest in the Oblast's rural area.

The oblast's industrial production dropped rapidly during the 1990s, as an industrial crisis was stimulated by the nationwide economic crisis which followed the collapse of the Soviet Union. However, by the end of the decade output was increasing. Moreover, the manufacturing sector, despite a sagging economy in the late 20th century, continues to account for about 40% of the oblast's GDP. The engineering, electric-power, metal-working, chemicals, and food processing are the dominant industries.

Most of the main farming areas are used for natural pastures or cultivation, which involves mainly wheat, sugar beet, and fodder crops. The main categories of productive holdings are wheat farms, dairy farms, poultry farms, and beef cattle. Agricultural lands cover 23,000 square kilometers (8,900 sq mi), or 77% of the oblast's territory.

Transportation industry of Kursk Oblast, with easy access to national and international markets, is the basis for the oblast's development. The most important modes of transport throughout the oblast are by railway and road. Total length of railway network is 1,100 kilometers (680 mi). Two major rail links pass through Kursk Oblast: Moscow–Kharkiv and Kiev–Voronezh. Region roads serve all towns and rural settlements through 5,600 kilometers (3,500 mi) road network. In addition, there is an airport in the oblast which was opened to international flights in July 1997.

Railroads are one on the most important component parts of the transportation system in the oblast. There is a total of sixty-five railway stations in the oblast. The operational length of the railways is 1,561.2 kilometers (970.1 mi), of which 500 kilometers (310 mi) are access roads. The length of the electrified lines is 242 kilometers (150 mi). The density of the railroads in Kursk Oblast is one of the highest in Russia. The largest railway junctions are Kursk, Lgov, and Kastornoye. Oblast's railroads are a part of the Moscow and South Eastern Railway systems.

Kursk Oblast's natural attraction is the Central Black Earth Nature Reserve, which offers great opportunity for hiking. Oblast's forests and others undeveloped areas are ideal for hunting, fishing, and camping. Traditional art and architecture are preserved in the town-museum of Rylsk and others historical towns of Kursk Oblast.