La Chaux-de-Fonds (French pronunciation: [laʃodəfɔ̃]) is a Swiss city of the district of La Chaux-de-Fonds in the canton of Neuchâtel. It is located in the Jura mountains at an altitude of 1000 m, a few kilometres south of the French border. After Geneva, Lausanne and Fribourg, it is the fourth largest city located in the Romandie, the French-speaking part of the country, with a population (as of December 2017) of Incorrect Municipal Code 1 6,421 .[2]

The city was founded in 1656. Its growth and prosperity is mainly bound up with the watch-making industry. It is the most important centre of the watch making industry in the area known as the Watch Valley. Partially destroyed by a fire in 1794, La Chaux-de-Fonds was rebuilt following a grid street plan, which was and is still original among Swiss cities, the only exception being the easternmost section of the city, which was spared of fire. This creates an interesting and obvious transition from the old section to the newer section. The roads in the original section are very narrow and winding, which then opens up to the grid pattern near the town square. The famous architect Le Corbusier, the writer Blaise Cendrars and the car maker Louis Chevrolet were born there. La Chaux-de-Fonds is a renowned centre of Art nouveau.

The watch making cities of La Chaux-de-Fonds and Le Locle have jointly received recognition from UNESCO for their exceptional universal value.

The Site's planning consists of two small cities located close to each other in the mountainous environment of the Swiss Jura. Due to the altitude (1000/) and the lack of water (porous sandstone underground) the land is ill-suited to farming. Planning and buildings reflect the watch-making artisans need of rational organization. Rebuilt in the early 19th Century, after extensive fires, both towns owe their survival to the manufacturing and exports of watches, to which, in the 20th Century, was added the minute micromechanical industry.

Along an open-ended scheme of parallel strips on which residential housing and workshops intermingle, the town's planned lay-out reflects the needs of the local watch-making culture that dates back to the 17th century, and which is still alive today. Both agglomerations present outstanding examples of mono-industrial manufacturing-towns, which are still well-preserved and active. The urban planning has accommodated the transition from the artisans’ production of a cottage industry to the more concentrated factory production of the late 19th and 20th centuries. In 1867 Karl Marx was already describing La Chaux-de-Fonds as a “huge factory-town” in Das Kapital, where he analyzed the division of labour in the watch making industry of the Jura.[3]

It is the tenth Swiss Site to be awarded World Heritage status, joining others such as the Old City of Bern, the Rhaetian Railway and the Abbey and Convent of St. Gallen.

The region was first inhabited around 10,000 years ago (Mesolithic). A skull and other traces have been found in caves nearby.[4]

In the middle of the 14th century, the region was colonized from the southern Val-de-Ruz. La Chaux-de-Fonds is first mentioned in 1350 as la Chaz de Fonz. In 1378 it was mentioned as Chault de Font.[4]

The region was under the authority of the lords of Valangin. In the 15th and 16th centuries, a second wave of colonization came from the so-called Clos de la Franchise (the valleys of Le Locle and La Sagne). Agriculture was the main activity but the village remained small. In 1531 there were only about 35 people living there. The first church was built in 1528. By 1530, La Chaux-de-Fonds, like the rest of the Valangin lands, converted to the new Reformed faith. The Lord of Valanginian, René de Challant, fixed the boundaries of the parish in 1550. The church and parish provided a political structure and a small community of Valanginian citizens, free farmers and peasants grew up around the church. By 1615 there were 355 people living in the village. In 1616, the low and middle jurisdiction over La Chaux-de-Fonds moved to Le Locle and La Sagne, while the high court remained in Valanginian. The agriculture, supplemented by mills on the banks of the Doubs, continued to dominate. However, at the end of the 16th century, the city became an important crossroad between Neuchâtel, Franche-Comté and the Bishopric of Basel.[4]

The community grew during the Thirty Years' War, mainly because of its strategic position for trade. Economic activity accelerated in the 18th century with the development of the city's lace and watchmaking industries. Pierre Jacquet-Droz, best known for his automata, was a particularly prominent watchmaker of this era.

In 1794, the city was devastated by fire. Charles-Henri Junod created the new city's plan in 1835, and the city is now known for its "modern," grid-like plan, in comparison with most European cities' meandering streets.[5][6] The central avenue is named the Avenue Léopold Robert.

Of the built up area, industrial buildings made up 1.6% of the total area while housing and buildings made up 8.4% and transportation infrastructure made up 4.6%. while parks, green belts and sports fields made up 1.1%. Out of the forested land, 24.2% of the total land area is heavily forested and 3.7% is covered with orchards or small clusters of trees. Of the agricultural land, 0.4% is used for growing crops and 40.0% is pastures and 14.2% is used for alpine pastures. All the water in the municipality is flowing water.[7]

The municipality is the capital of the district of the same name. It is located in the Jura Mountains near the French border at an elevation of about 1,000 m (3,300 ft).

The blazon of the municipal coat of arms is Tierced per fess, Azure three Mullets of Five Argent in fess, Argent a Hive Or surrounded by seven Bees of the same, and chequy [of 7x3] Argent and Azure.[8]

The historical population is given in the following chart:[4] 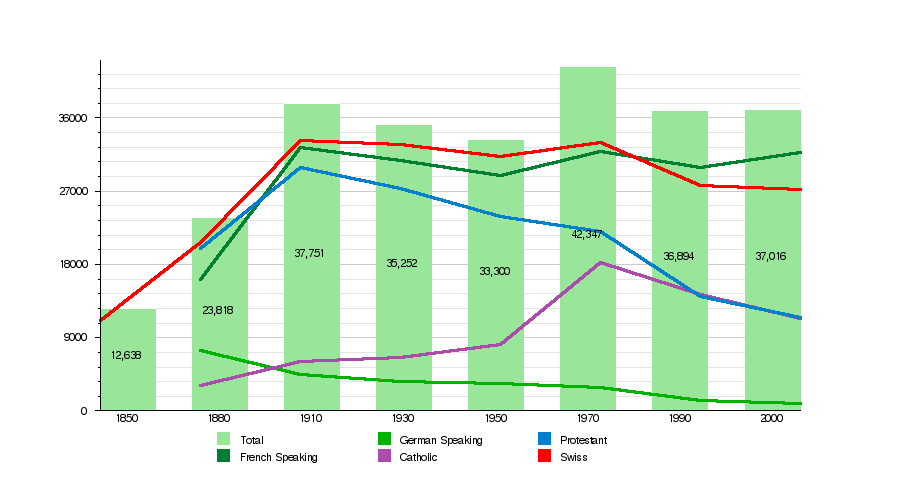 Library of the City of Chaux-de-Fonds

In the canton of Neuchâtel most municipalities provide two years of non-mandatory kindergarten, followed by five years of mandatory primary education. The next four years of mandatory secondary education is provided at thirteen larger secondary schools, which many students travel out of their home municipality to attend.[20] The primary school in La Chaux-de-Fonds is combined with Les Planchettes. During the 2010–11 school year, there were 38 kindergarten classes with a total of 728 students in La Chaux-de-Fonds. In the same year, there were 113 primary classes with a total of 2,042 students.[21]

As of 2000, there were 754 students in La Chaux-de-Fonds who came from another municipality, while 644 residents attended schools outside the municipality.[18]

La Chaux-de-Fonds is home to 2 libraries. These libraries include; the Bibliothèque de la Ville and the Haute école Arc – Arts appliqué. There was a combined total (as of 2008) of 670,267 books or other media in the libraries, and in the same year a total of 342,720 items were loaned out.[22]

La Chaux-de-Fonds is the home of the Musée International d'Horlogerie (International Museum of Watch Making), originally constructed with funds donated by the Gallet watchmaking family in 1899.[23] The Museum is considered as an important showcase for the history of the timekeeping arts.

Art Nouveau had a great influence on architecture and culture in the city during the late 19th century.

The daily newspaper L'Impartial has been published in La Chaux-de-Fonds since 1880.

The Wakker Prize was granted to La-Chaux-de-Fonds in 1994.

La Chaux-de-fonds is considered as a hockeytown in Switzerland and is home to HC La Chaux-de-Fonds, a professional ice hockey team that competes in the Swiss League (SL), the second highest league in Switzerland. Their home arena is the 7,200-seat Patinoire des Mélèzes. The team had a successful stint in the National League (NL) where they played for a few years and won the championship six times in a row, from 1968 to 1973.

The city's economy is based on industry and watch manufacturers.

La Chaux-de-Fonds is twinned with

Template:Municipalities of the district of La Chaux-de-Fonds Template:World Heritage Sites in Switzerland