9999 Cave of the Patriarchs, Hebron, Land of Canaan 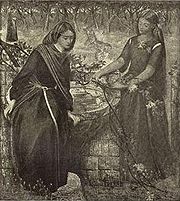 Laban welcomed his nephew, Jacob as a young man, and set him the stipulation of seven years' labour before he permitted him to marry his daughter Rachel. Laban tricked Jacob into marrying his elder daughter Leah instead. Jacob then took both women as wives. The dealings between the two branches are described in Gen. 24; 27:43–31:55. Jacob lived with him and served him for 20 years.

Laban and his family were described as dwelling in Paddan Aram, in Mesopotamia. Though the biblical text itself does not attest to this, Rabbinic sources also identify him as the father of Bilhah and Zilpah. Bilhah and Zilpah were maids of Leah and Rachel and also concubines with whom Jacob had children (Midrash Raba, Gen 24).

Jacob marries Bilhah, and she bears Dan and Naphtali—He marries Zilpah, and she bears Gad and Asher—Leah bears Issachar and Zebulun and a daughter, Dinah—Then Rachel conceives and bears Joseph—Jacob works for Laban for wages of cattle and sheep.Genesis 30.

Some information in this article or section has not been verified and may not be reliable.
Please check for any inaccuracies, and modify and cite sources as needed.
Community content is available under CC-BY-SA unless otherwise noted.
Advertisement