Familypedia
Register
Don't have an account?
Sign In
Advertisement
in: Jerome (surname), Born in 1817, Died in 1891,
and 14 more

Leonard Jerome was the son of Aurora Murray (1785–1867) and Isaac Jerome (1786–1866). Isaac was a descendant of Timothy Jerome, a French Huguenot immigrant who arrived in the New York Colony in 1717. Jerome was born on a farm in the Central New York town of Pompey, near Syracuse. He originally enrolled in Princeton University, then known as the College of New Jersey, as a member of the Class of 1839, before leaving for Union College, where he studied law and set up a practice in Rochester, New York. He later moved to New York City, where he became a stock speculator and promoter.

Jerome was a flamboyant and successful stock speculator. He made and lost several fortunes, and was known as "The King of Wall Street". He held interests in several railroad companies and was often a partner in the deals of Cornelius Vanderbilt. He was a patron of the arts, and joined in the founding[citation needed] of the Academy of Music, one of New York City's earliest opera houses.

During the New York Draft Riots, Jerome defended the New York Times office building with a Gatling Gun.[2] Although he had significant holdings in the Times,[3] he was not the majority shareholder as is sometimes erroneously claimed.

The Jerome Mansion, on the corner of Madison Avenue and 26th Street, had a six-hundred-seat theatre, a breakfast room which seated seventy people, a ballroom of white and gold with champagne- and cologne-spouting fountains,[4] and a view of Madison Square Park. It was later sold and housed a series of private clubs. The mansion was demolished in 1967.

Jerome married Clarissa Hall (1825–1895) in Palmyra, New York, on 5 April 1849; and they had four daughters together. One daughter, Camille, died at age eight. The other three – Jeanette, Clarita, and Leonie – became known, in some quarters, as "the Good, the Witty and the Beautiful". Leonard Jerome's wealth afforded his daughters the opportunity to spend much time in Europe, where they associated with the aristocratic elite of the day. All three married British or Anglo-Irish husbands:

Jerome was also rumored to be the father of the American opera singer Minnie Hauk. He also had an affair in the 1860s with Fanny Ronalds, then separated from her husband. Ronalds later lived in London, where she remained a friend of Jerome's daughter Jennie.

Leonard Jerome died at the age of 73 in Brighton, England. He is buried in the Green-Wood Cemetery in Brooklyn. 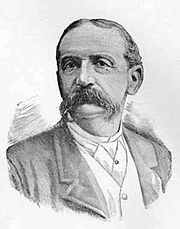