Familypedia
Register
Don't have an account?
Sign In
Advertisement
in: Saltonstall (surname), Born in 1892, Died in 1979,
and 23 more

Gov. Leverett A. Saltonstall was an American lawyer and politician from Massachusetts. He served three two-year terms as the 55th Governor of Massachusetts, and for more than twenty years as a United States Senator (1945–1967). Saltonstall was internationalist in foreign policy and moderate on domestic policy, serving as a well-liked mediating force in the Republican Party. He was the only member of the Republican Senate leadership to vote for the censure of Joseph McCarthy.

Leverett Saltonstall died of congestive heart failure in 1979 aged 86, and is buried in Harmony Grove Cemetery in Salem, Massachusetts. The Saltonstall Building in downtown Boston is named for him.

Saltonstall married Alice Wesselhoeft (1893–1981) of Jaffrey, New Hampshire, in 1916, while still in law school. Together they had six children: 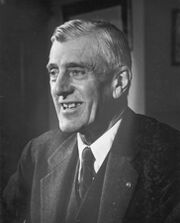