Lewisham is a suburb in the inner-west of Sydney, in the state of New South Wales, Australia. Lewisham is located 8 kilometres south-west of the Sydney central business district, in the local government area of Marrickville Council. The postcode is 2049. Lewisham is surrounded by the suburbs of Petersham, Dulwich Hill, Summer Hill, Haberfield and Leichhardt.

Lewisham took its name in 1834 from the estate of Joshua Frey Josephson, a German-born businessman who would later become mayor of Sydney.[2] The estate was named it after the London borough of Lewisham, which means Leofsa's village or manor.[3]

The original residents of the Lewisham area were the Cadigal clan of the Darug tribe. Artefacts found near the Cooks River indicate at least 7,000 years of habitation in the local area.[4] After the First Fleet arrived in 1788, they set up camp in the middle of Cadigal territory. While the first governor Arthur Phillip endeavoured to establish cordial relations with the Cadigals and their neighbours, the two groups were competing for the same food sources and tensions inevitably developed. In 1789, a smallpox epidemic developed and wiped out the majority of the Cadigals.[5] By 1809, all the land within Lewisham had been granted. 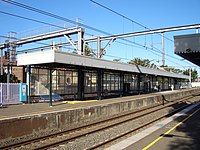 Lewisham railway station is on the Inner West line of the CityRail network. This provides access to the city, the interchange station of Strathfield and the commercial centres of Burwood and Newtown.

Lewisham is notable in railway history as the termination point for the first train journey in the NSW colony in 1855, although the railway station was not built until 1885. The whipple truss bridge over Long Cove Creek was constructed 1885-1886 featuring North American technology developed by Squire Whipple.[6] It is probably the most significant railway bridge site in Australia, certainly in NSW. It has the unique distinction of four different types of bridges from different eras. Engineers Australia designated the Viaduct in 1994 as an historic engineering marker.

The Metropolitan Goods railway line also runs through the suburb, passing beneath the bridge over Long Cove Creek. The line is currently disused, but it is to be utilised to extend the current light rail service that runs from Central Station to Lilyfield through to Dulwich Hill.[7][8] There will be two new stations serving Lewisham. These are - Lewisham West (adjacent to the former flour mill on the border with Summer Hill) and Taverners Hill (near Parramatta Road). Access to the city will be quicker by train, but the light rail may be used for some cross-regional journeys. It will also interchange with Dulwich Hill railway station on the Bankstown Line.

The 413 bus service, between Campsie and the city, cuts through the middle of Lewisham and provides an interchange with the railway station. Several bus services (461 - Burwood to the city, 480 & 483 - Strathfield to the city) run along Parramatta Rd. These will interchange with the Taverners Hill stop. The other bus corridor is along New Canterbury Rd. This is served by the 428/L28 from Canterbury to the city via Newtown and the 444/445 from Campsie to Balmain.[9]

Trinity Grammar School formerly Saint Thomas à Becket Primary School, is located on 5 Thomas Street, Lewisham and was founded in 1855 by the Australian Christian Brothers. Christian Brothers' High School is located on 58 - 61 The Boulevarde. Lewisham Public School is located on 71 The Boulevarde Lewisham. Petersham Public School is on the border of Lewisham and Petersham, the John Berne School (formerly the Berne Education Centre) and the Catholic Intensive English Centre are located on the site of the former Saint Thomas à Becket High School.

Saint Thomas Becket's Catholic church is located in Thomas Street, the current priest is Fr. Michael Butler (1988–present). The Servants of Mary Help of Christians operates its Marian Centre from St Thomas Becket Primary School Hall. Lewisham is also the home of the Maternal Heart of Mary Latin Mass Community, of which Fr Laurence Gresser FSSP is the Chaplain. The church is situated behind St Thomas Becket's, on Charles O'Neill Way.

According to the 2001 census, Lewisham had a population just under 3000. The character of its population was quite different to its near neighbours, not having a large number of residents born overseas. After Australia, the most common countries of birth were England (3.5%), Portugal (2.9%) and New Zealand (2.8%). There were also a reasonable number of Greek speakers (3.9%), just topping Portuguese (3.5%) as the second most common language in the area after English. The number of Indigenous Australians (2.6%) was higher than the national average and also a significant local demographic.[10]