Familypedia
Register
Don't have an account?
Sign In
Advertisement
in: Cities in Kansas, County seats in Kansas, Cities in Seward County, Kansas,
and 2 more

Early settler S. S. Rogers built the first house in what would become Liberal in 1872. Rogers became famous in the region for giving water to weary travelers. Reportedly, Liberal gained its name from the common response to his acts of kindness, "That's very liberal of you."[8] In 1885 Rogers built a general store, and with it came an official U.S. Post Office. Rogers named the post office 'Liberal'. After the railroad was built close by, a plan for the town site was created in 1888. A year later the population was around 800.[8]

Drought caused some farmers to give up and look for more fertile territory; however, when the nearby Indian Territory was opened, more settlers headed to the cheap land that would become Oklahoma.[8]

Natural gas was discovered west of town, in what would become part of the massive Panhandle-Hugoton Gas Field, in 1920. Oil was discovered southwest of town in 1951. In 1963 the largest helium plant in the world, National Helium, was opened.[8]

The city lies approximately 10 miles (16 km) southwest of the Cimarron River in the High Plains region of the Great Plains.[10]

On average, Liberal receives 20.15 inches (512 mm) of precipitation annually, a majority of which occurs from May to August, and records 58 days of measurable precipitation.[15] Measurable snowfall occurs an average of 8.9 days per year with 6.1 days receiving at least 1.0 inch (2.5 cm). Snow depth of at least one inch occurs an average of 9.5 days a year. Typically, the average window for freezing temperatures is October 21 through April 14.[15] Liberal is located in USDA Plant Hardiness Zone 7.[16]

There were 6,498 households out of which 42.8% had children under the age of 18 living with them, 58.0% were married couples living together, 10.4% had a female householder with no husband present, and 26.8% were non-families. 21.3% of all households were made up of individuals and 8.1% had someone living alone who was 65 years of age or older. The average household size was 2.96 and the average family size was 3.46.

Energy and agriculture are the main economic drivers of the area. Natural resources include oil, natural gas, water, gravel and sand. The beef industry (ranches, feed lots and packing plants) is Liberal's largest source of employment. Hard winter wheat, corn, milo, alfalfa and cotton are common crops. Trucking is a major industry. Dairies and pork processors are a growing business.

Liberal has a commission-manager government with a city commission consisting of five members elected at-large. Elections occur every two years in the odd numbered year, and commissioners serve two-year or four-year terms depending on the number of votes they receive. Each year, the commission appoints a member to serve as mayor and another to serve as vice-mayor.[18] The city manager heads the city administration.[19]

There is also a Christian school in Liberal: Fellowship Baptist School (K-12).[21]

U.S. Route 83 runs north-south along the east side of the city, intersecting U.S. Route 54 which runs northeast-southwest. In addition, Liberal is the western terminus of U.S. Route 270 which runs concurrently with U.S. 83 south from the city.[10]

The Tucumcari Line of the Union Pacific Railroad runs parallel to U.S. 54 northeast-southwest through the city.[25]

Four newspapers are published in Liberal. The Leader & Times is the city's main daily newspaper, published six days a week.[26] It is the result of the merger between the city's two previous dailies, the High Plains Daily Leader and the Southwest Daily Times.[27] The publisher of the Leader & Times also prints a weekly Spanish language paper, El Lider.[28] Seward County Community College publishes a bi-weekly student newspaper, the Crusader.[29] The fourth paper is the Liberal Light, published weekly.[30]

Liberal is a center of broadcast media for southwest Kansas and the Oklahoma Panhandle. Two AM and seven FM radio stations are licensed to and broadcast from the city.[31][32] Liberal is in the Wichita-Hutchinson, Kansas television market,[33] and one television station broadcasts from the city: KSWE-LD, a sister station of KDGL-LD in Sublette, Kansas.[34]

Liberal is famous for its annual Pancake Day race that is held in competition with the town of Olney, England for the fastest time between both cities.

Liberal has a water park known as Adventure Bay.

The fifth largest collection of civilian and military aircraft in the United States is located at the Mid-America Air Museum. Started with a gift of fifty planes by General Tom (Thomas) Welch, Jr., the museum has more than one hundred aircraft.[35]

The Coronado Museum has items from the Native Americans that lived in the area, as well as items from Francisco Vásquez de Coronado's expedition to the area in 1541, and the history of farming and ranching in the county in more recent times.[36]

Liberal is home to "The Land of Oz" exhibit from The Wizard of Oz, a recreation of Dorothy Gale's house and the famed Yellow Brick Road, featuring donated bricks bearing the names of such luminaries as former U.S. Senator Bob Dole, Ronald and Nancy Reagan, and Liza Minnelli (Judy Garland's daughter). This exhibit was originally designed and displayed for Topeka in 1981, but relocated here eleven years later by its creator Linda Windler.[37]

Liberal Memorial Library is located on North Kansas Avenue between Fifth and Sixth Streets in Cooper Park. The Book Front entrance was completed in April 1955 and designed by the building's architect George L. Pitcher. Wheeler Williams, a sculptor from New York, signed an agreement in October 1960 to mold the "Pioneer Mother of Kansas." This six foot statue, sponsored by Mr. and Mrs. D. K. Baty, was to be erected in Cooper Park on Memorial Day, May 30, 1961. It was placed opposite of the "Statue of Liberty," which was donated and placed in Cooper Park by the Boy Scouts of America.

The Liberal Bee Jays, a semi-professional baseball team, have won five national championships and 13 state championships. The Bee Jays have been coached by three major league managers and have sent 165 players to the major leagues.

In popular culture and the arts[]

Composer Mark So wrote his LIBERAL PLAIN SONG (for Joseph Kudirka) while stopped at a gas station in Liberal in 2005. [2]

In the movie National Lampoon's Vacation, Clark W. Griswold mentions departing the route of travel to Liberal to see the world's largest house of mud. The idea is rejected by his wife, Ellen, in favor of getting to her cousin Eddie's home.[38]

Notable individuals who were born in and/or have lived in Liberal include: 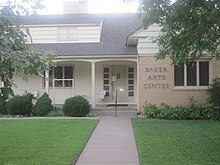 The Pioneer Mother of Kansas statue (2010)