Familypedia
Register
Don't have an account?
Sign In
Advertisement
in: Little Dixie (Missouri), Regions of Missouri, Regions of the Southern United States

Edit
watch 01:36
We're Getting Mutants in the MCU - The Loop
Do you like this video?
Play Sound
See also: Little Dixie (Oklahoma)

Little Dixie is a 13- to 17-county region of Missouri found along the Missouri River, settled primarily by migrants from the hemp and tobacco districts of Kentucky, Virginia, and Tennessee. Today, the region identifies with the Midwest, but because of Southerners settling there first, the pre-Civil War culture closely paralleled that of the Upper South. When the Southerners resettled in Missouri, they brought their cultural, social, agricultural, political and architectural practices; they also brought enslaved Africans and their descendants, from whom they extracted forced labor and thus accumulated wealth. On average Missouri’s slave population was only 10 percent, but in Little Dixie, county and township slave populations ranged from 20 to 50 percent, corresponding to the concentration of large plantations along the river.

While definitions of the counties included in Little Dixie vary, the following had populations with proportions of slaves of 25 percent or more in 1860: Callaway, Boone, Howard, Saline, Chariton, Lafayette and Clay. The only other county of the state where the enslaved population was as high in 1860 was New Madrid in the southeast, devoted to cotton plantations along the Mississippi River.[1] 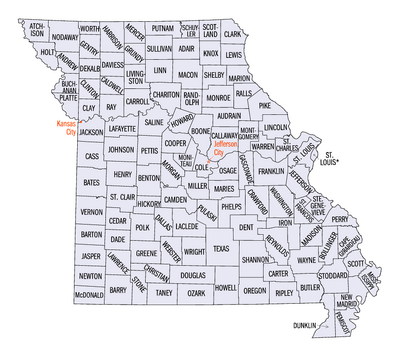 Some defined the “heart” of Little Dixie as the following counties:[2]

The major cash crop was hemp. In Lafayette County, locals went so far as to declare hemp king and dedicate all production to it while foregoing necessary food production. Planters in other Little Dixie counties, such as Platte, Howard, Chariton and Ralls, grew millions of pounds of tobacco on large plantations with 20 or more slaves. Some farmers and planters grew cotton and sent their surplus down the Missouri River to St. Louis and New Orleans.

Planters named their large estates, such as Greenwood, Redstone, Oakwood and Sylvan Villa in Howard County. On these large plantations, slave populations ranged between 15 and 70 people, who cultivated acreage of 500 acres (2 km²) to 2000 acres (8 km²), or more.

In many parts of Little Dixie, the antebellum plantations still stand today and many people participate in heritage tourism and historic projects.

"Little Dixie" later was used as the name of a former Missouri athletic conference. The Little Dixie Conference, or LDC, was made up of the following area high schools:

The Little Dixie Conference disbanded prior to the 2006 fall sports season. All schools (except Community and Sturgeon) formed the new Mid-Missouri Conference along with North Callaway and Tipton high schools.