Familypedia
Register
Don't have an account?
Sign In
Advertisement
in: Of Lithuania (surname), Born in 1310, Died in 1383,
and 9 more

He was the youngest son of Gediminas, Grand Duke of Lithuania and Jewna of Polotsk. He married a daughter of Andrew of Galicia and ruled Lutsk in eastern Volhynia.[1] After Andrew and his brother Lev II died around 1322, Galicia–Volhynia did not have a male successor. Instead of promoting Liubartas and causing a war with Poland, Gediminas compromised with Władysław I of Poland. Both parties agreed to install Boleslaw-Yuri II, nephew of Leo and Andrew.

Boleslaw-Yuri was a son of Trojden I of Mazovia from the Piast dynasty, a cousin of Władysław I, and nephew of Gediminas' son-in-law Wacław of Płock.[2] At the time Boleslaw was fourteen years old and was betrothed to Eufemija, daughter of Gediminas. Liubartas continued to rule Lutsk and Volodymyr-Volynskyi. That way the Halych–Volhynia Wars were postponed until after Boleslaw's poisoning in 1340.[2] He was poisoned by rebellious nobles, who invited Liubartas to become the ruler for both Galicia and Volhynia.[1] Sources are too scarce to fully reconstruct events between 1341–1349.[3]

Despite the support from his brothers Algirdas and Kęstutis, Liubartas lost all territories except for eastern Volhynia with Lutsk to Casimir III of Poland in 1349. In 1351 he was even taken prisoner during a battle, and Kęstutis had to rescue him. In 1366 a treaty was signed: Liubartas retained eastern Volhynia with Lutsk, while Poland got western Volhynia and Halych. However the matter was settled only in 1370: Liubartas took advantage of Casimir's death and captured all of Volhynia.[1] The territories changed again only in 1569, when Volhynia, including Lutsk, was transferred to Poland by the Union of Lublin.

In 1382, after death of Louis I of Hungary, Liubartas captured Kremenets, Przemyshl, and other cities from Hungary.[4] He supported his brother Kęstutis against nephew Jogaila during the succession fights. He built a castle in Lutsk, known as the Lubart's Castle, that survives to this day. Liubartas died ca. 1385, having ruled Volhynia for roughly sixty years.

He married Anna of Volyn, daughter of Andrei of Galicia. This marriage was childless. He married for the second time ca. 1350 Agafia Konstantinovna of Rostov (c1330-c1360)Agafia, daughter of Konstantin of Rostov, a relative of Simeon of Moscow.[4] He had three sons, Fyodor, Simeon, and Lazar. Fyodor inherited Volhynia, and died in 1431. 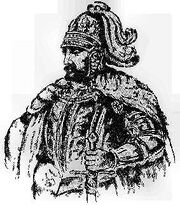