Familypedia
Register
Don't have an account?
Sign In
Advertisement
in: Non-SMW people articles, Born in Coshocton County, Ohio, Died in Illinois,
and 3 more

Census records prior to marriage[]

First in birth order were two twins who died at birth:

James and Lizzie also had the following two children who survived to maturity:

The Centennial History of Coshocton County, Ohio published in 1909 wrote: "Alberta is the wife of J.C. Borland, who is engaged in the wholesale and retail meat business at Bowerston, Ohio. Of their three children but one survives — Weldon Earl. Earl Smith and Ethel May Miller are the other members of our ..." 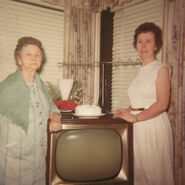 1966 on December 13, 1966
Community content is available under CC-BY-SA unless otherwise noted.
Advertisement