Familypedia
Register
Don't have an account?
Sign In
Advertisement
in: Pages with broken file links, London boroughs, London Borough of Lewisham,
and 2 more

The London Borough of Lewisham (

pronunciation (help·info)) is a London borough in south-east London, England and forms part of Inner London. The principal settlement of the borough is Lewisham. The local authority is Lewisham London Borough Council and it is based in Catford.

The Prime Meridian passes through Lewisham.

Minor boundary changes have occurred since its creation. The most significant amendments were made in 1996, when the former area of the Royal Docks in Deptford was transferred from the London Borough of Greenwich.[3]

The borough is surrounded by the Royal Borough of Greenwich to the east, the London Borough of Bromley to the south and the London Borough of Southwark to the west. The River Thames forms a short section of northern boundary with the Isle of Dogs in the London Borough of Tower Hamlets. Deptford Creek, Pool River, River Quaggy and River Ravensbourne pass through the borough. Major landmarks include All Saints Church in Blackheath, the Citibank Tower in Lewisham, Dietrich Bonhoeffer Church (Sydenham's German Church, technically located in Forest Hill), the Horniman Museum in Forest Hill and Millwall F.C. are based in the borough, their stadium The Den being located in South Bermondsey.

The motto of the borough is "Salus Populi Suprema Lex", which means (roughly translated) "The Welfare of the People is the first great Law".

The current Chief Executive is Barry Quirk. The borough is administered by the four directorates of the council: Children and Young People, Community Services, Customer Services, and Resources & Regeneration.

The borough is twinned with the following towns:

The borough has also signed a "friendship link" with Ekurhuleni, near Johannesburg, South Africa.

Freedom of the Borough[]

The honour of Freedom of the Borough has been awarded to: 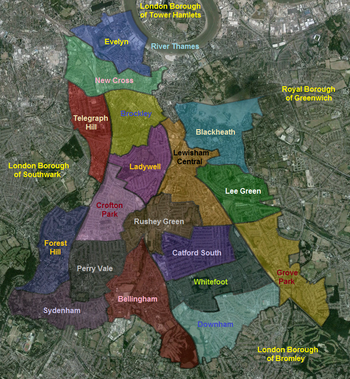 The London Borough of Lewisham is divided into 18 wards, first used in the 2002 elections, they are:

Previously the borough was divided into 26 wards and 6 areas, used for elections from 1978 to 1998. Some of these former wards had the same names as the present wards, but their borders were different. When the wards were revised for 2002, some became larger, absorbing others. The previous wards and areas were:

Unlike in most English districts, Lewisham's council is led by a directly-elected mayor. The system was established at the 2002 council elections, and has now run for three mayoral elections, all of which Steve Bullock has won for the Labour party. The current number of councillors after the last local election is Labour 40, Liberal Democrats 12, Conservative 2 and Green Party 1.

The borough includes the constituencies of Lewisham Deptford, Lewisham West and Lewisham East.

These are the MPs who have represented constituencies covered by the borough since its formation in 1964. Note that constituencies change their boundaries over time, even where names remain the same.

Lewisham station, once known as Lewisham Junction, is located at the junction of the lines to Dartford and Hayes, and is also the terminus of the southern branch of the Docklands Light Railway. The East London Line (on the London Underground network) terminated at New Cross and New Cross Gate until December 2007. An extension to this line opened on the 23 May 2010, serving, Honor Oak Park, Forest Hill, and Sydenham. This forms part of the London Overground network.

The South London Line runs along the extreme North West of the borough, at present there are no stations that are within the borough. From 2015, Surrey Canal Road is planned to open, providing a link to Clapham Junction.

There are no Tube stations in the borough, as the East London Line is now part of London Overground. However, Lewisham Council and Network Rail would like the Bakerloo Line extended from Elephant & Castle to Lewisham and Hayes.

Two Cycle Superhighways will operate through Lewisham in the future. CS5 was originally intended to run to Lewisham but New Cross gyratory and Lewisham's big roundabout by Lewisham station has postponed it.

Millwall F.C. is based in The Den in the New Cross area.

The Borough has a Non-League football club Lewisham Borough F.C. who play at the Ladywell Arena, in Catford.

Wikimedia Commons has media related to:
London Borough of Lewisham