Shared services are borough council services shared between two or more boroughs. Shared services were previously resisted due to councils jealously guarding their authority. However, as the need for budget cuts in the late 2000s became apparent some councils have sought service mergers.[1] Westminster and Hammersmith & Fulham will merge their education services, including school admissions and transport by 2011.[2] In October 2010 Westminster, Hammersmith & Fulham and Kensington & Chelsea announced plans to merge all their services to create a "super-council". Each would retain its own political identity, leadership and councillors but staff and budgets would be combined for cost savings.[3] Lambeth and Southwark likewise expressed an interest in sharing services.[4]

The management thinker and inventor of The Vanguard Method, Professor John Seddon claims that shared service projects based on attempts to achieve 'economies of scale' are a mix of a) the plausibly obvious and b) a little hard data, brought together to produce two broad assertions, for which there is little hard factual evidence.[5] He argues that shared service projects fail (and often end up costing more than they hoped to save) because they cause a disruption to the service flow by moving the work to a central location, creating waste in handoffs, rework and duplication, lengthening the time it takes to deliver a service and consequently creating failure demand (demand caused by a failure to do something or do something right for a customer).[6]

There are four boroughs which do not use the term "London Borough of" in their names. They are Westminster, which is termed the City of Westminster as it has city status, Kingston upon Thames, Kensington and Chelsea, and (since 2012) Greenwich, which are termed "Royal Borough of", due to their Royal borough status.

The present London boroughs were created by the London Government Act 1963. They came into existence on 1 April 1965 with the creation of Greater London. The first London Borough elections had been held in 1964 with the newly elected London Borough Councils acting as "shadow" authorities before coming into power the following year.

They had wider authority than the inner London metropolitan boroughs and neighbouring urban districts and municipal boroughs which they mostly replaced, but less power than the three county boroughs of Croydon, West Ham and East Ham, which ceased to exist at the same time.

Between 1965 and 1986 the London boroughs were part of a two-tier system of government, and shared power with the Greater London Council (GLC). However on 1 April 1986, the GLC was abolished, the London boroughs inherited most of its powers and became in effect unitary authorities (combining both county and borough functions). Since the creation in 2000 of a new Greater London Authority, covering the former GLC area but with more limited powers, the boroughs no longer have all the powers of English unitary authorities.

The boroughs were created as follows. There have been some changes to boundaries and some boroughs have been renamed since 1965. 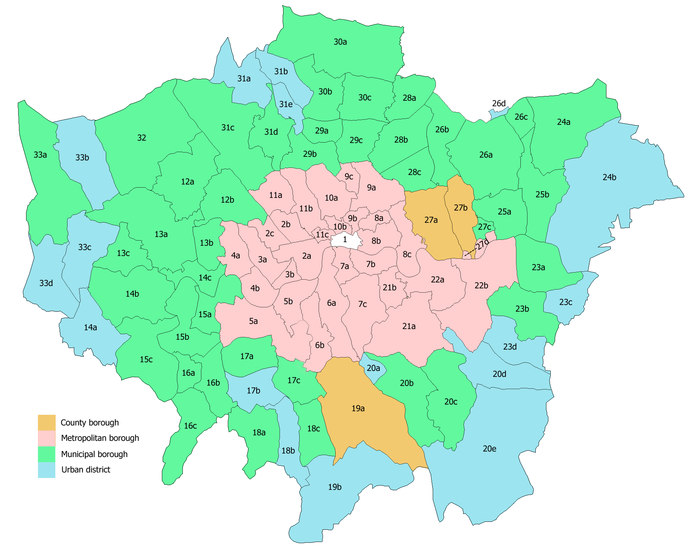