Lorna was called Dorothy Marjoram when she was born.

Lorna was Lorna Dorothy Marks after her marriage.

Lorna's mother, Annie, was forced to give her up to her then employer, William John Weily (1868-1944), before her parents would accept her (Annie) back into the family. Lorna knew nothing of this until she applied for a passport at age 60 and discovered that she had no birth certificate.

Lorna met Percy Marks, who also lived in Orange, and they married in 1936.

Lorna and Percy lived in the house in Sale Street, Orange after their marriage. Bubba gave them the land and they had the house built. Percy may have assisted in the construction of the house. He gathered up the nails dropped during the construction and did not need to buy any for years.

Lorna and Percy had a stillborn daughter in 1937. Because she was stillborn she was not allowed to be buried in the Church of England section as she was not baptised. Lorna was very upset by this; the child was buried in the Methodist section of Orange Cemetery.

When Sylvia was a baby they put her in the pram and picked plums on the block across the street.

Lorna and Percy had a daughter, Enid, in 1942. Also in 1942, Percy joined the Royal Australian Air Force. Lorna stayed behind to raise the children.

Percy purchased a farm at Borenore called Roma. The family moved there in June 1946. They ate a lot of rabbits the first couple of years.

In Jan 1950 they moved from Orange to Lightwood, Jingellic, New South Wales. The property was a square mile block, subdivided from the original "Lightwood" property and containing the original farm house.

In the first year they moved in, there was a great bush fire and all the land was burned. Percy and Lorna stayed to fight the fire. The children fled with a neighbour to the Jingellic township, though later they wished they had stayed. Their hay sheds were destroyed in the fire.

Lorna was always an active member of the Red Cross Society, first in Jingellic and later in Caloundra.

In 1972, after having spent the best part of a year travelling around Australia and having sold the Lightwood Property to son-in-law Phillip Potter, Percy and Lorna retired and settled down to live at 19A Maltman Street, Caloundra.

After Percy died, Lorna moved from their house to a unit a few blocks away.

Lorna's death was registered on 18 May 1999 in Victoria, Australia, but she is buried in Caloundra. The undertakers were Gregson and Weight Undertakers, Caloundra.

See the descendants tab above. 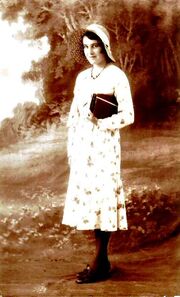