Familypedia
Register
Don't have an account?
Sign In
Advertisement
in: Established in 1946, Lower Saxony, States of Germany, NUTS 1 statistical regions of the European Union

Edit
The subject of this article was previously also known as Saxony. For other uses, see Saxony (disambiguation).

With an area of 47,624 km² and nearly eight million inhabitants, Lower Saxony (German: Niedersachsen [ˈniːdɐzaksn̩]) lies in north-western Germany and is second in area and fourth in population among the sixteen Länder (states) of Germany. In rural areas Low German is still spoken, but the number of speakers is declining.

Lower Saxony borders on (from north and clockwise) the North Sea, the states of Schleswig-Holstein, Hamburg, Mecklenburg-Vorpommern, Brandenburg, Saxony-Anhalt, Thuringia, Hesse and North Rhine-Westphalia, and the Kingdom of the Netherlands. The state of Bremen forms two enclaves within Lower Saxony. The state's principal cities include Hanover, Braunschweig (Brunswick), Osnabrück, Oldenburg, and Göttingen.

The northwestern portion of Lower Saxony is a part of Frisia; it is called Ostfriesland (East Frisia) and lies on the coast of the North Sea. It includes seven islands, known as the East Frisian Islands. In the southwest of Lower Saxony is the Emsland, a sparsely populated area, once full of inaccessible swamps. The northern half of Lower Saxony is absolutely flat, but there are two mountain chains in the south: the Weserbergland ("Weser Hilly Region") and the Harz. The middle of the state houses the largest cities and the economic centres: Hanover, Hildesheim, Wolfsburg, Salzgitter, and Braunschweig. The region in the northeast is called Lüneburger Heide (Lüneburg Heath), the largest heath of Germany and in medieval times wealthy due to the salt trade. To the north the Elbe river separates Lower Saxony from Hamburg, Schleswig-Holstein, Mecklenburg-Western Pomerania and Brandenburg. The area on the southern banks is called Altes Land, and it is characterised by thousands of fruit trees. 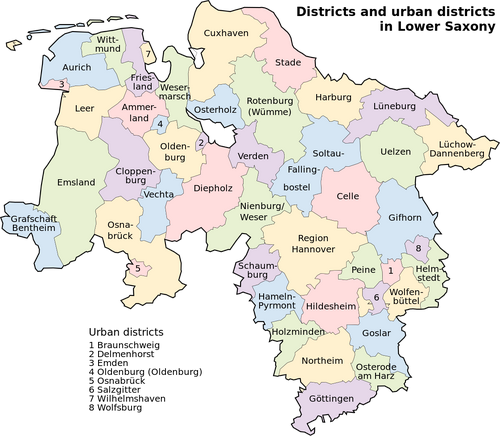 Lower Saxony is divided into 38 districts (Landkreise or simply Kreise):

Furthermore there are eight or ten urban districts:

¹ following the "Göttingen Law" of January 1 1964, the town of Göttingen is incorporated into the district (Landkreis) of Göttingen, but the rules on urban districts still apply, as long as no other rules exist.
² following the "Law on the region of Hannover", Hannover counts since November 1 2001 as an urban district as long as no other rules apply.

The area is named after the Saxons. The Saxons lived in today's state of Schleswig-Holstein and merged with the Chauci on the left bank of the river Elbe until the middle of the 1st millennium AD. They then expanded over the whole of today's Lower Saxony and further. Originally the region was simply called Saxony, but as the center of gravity of the Duchy of Saxony gradually moved up the Elbe, towards the present-day states of Saxony-Anhalt and Saxony, the region was given the name of Lower Saxony, which it bore as an Imperial Circle Estate from the late 15th century on.

The state was founded in 1946 by the British military administration, who merged the former states of Brunswick, Oldenburg, and Schaumburg-Lippe with the former Prussian province of Hanover.

After the Second World War, the military authorities appointed the first Legislative Assembly (Landtag) in 1946, followed by a direct election of Lower Saxony's legislature a year later. It resulted in the election of Social Democrat leader Hinrich Wilhelm Kopf, who became the first prime minister. Kopf led a five-party coalition, whose basic task was to rebuild a state affected by the war's rigours. Kopf's cabinet had to organise an improvement of food supplies and the reconstruction of the cities and towns destroyed by the Allied air raids of the war years. In addition, the first state government also faced the challenge of integrating hundreds of thousands of refugees from Germany's former territories in the east (such as Silesia and East Prussia), which had been annexed by Poland and the Soviet Union.

Between 1978 and 2004, the state's districts and independent towns were grouped into four administrative regions (Regierungsbezirke): Since 2004 the Bezirksregierungen have been broken up again.

Niedersachsen is one of Europe's leading producers of oil. Wheat, potatoes, rye, and oats are some of their major agricultural products. Mineral products include iron and lignite. Manufacturing is another large part of their economy.

The coat of arms shows a white horse (Niedersachsenross) on red ground, which is an old symbol of the Saxon people.