Familypedia
Register
Don't have an account?
Sign In
Advertisement
in: Lviv Oblast, Oblasts of Ukraine, Galicia (Eastern Europe),
and 2 more

Lviv Oblast (Ukrainian: Львівська область|, translit. L’vivs’ka oblast’; also referred to as L’vivshchyna – Ukrainian: Львівщина|) is an oblast (province) in western Ukraine. The administrative center of the oblast is the city of Lviv.

The oblast was created as part of the Ukrainian Soviet Socialist Republic on December 4, 1939 following the Soviet invasion of Poland. The territory of the former Drohobych Oblast was incorporated into the Lviv Oblast in 1959.

The oblast's strategic position at the heart of central Europe and as the gateway to the Carpathians has caused it to change hands many times over the centuries. It was ruled variously by Great Moravia, Kievan Rus', Poland, was independent as the state of Galicia-Volhynia (circa 1200 to 1340), and then ruled by the Polish-Lithuanian Commonwealth (1340 to 1772), the Austro-Hungarian Empire (1772 to 1918), and Poland (1918 to 1939), when it was part of the Lwów Voivodship of the Second Republic of Poland. The region's historically dominant Ukrainian population declared the area to be a part of an independent West Ukrainian National Republic in 1918, but this endured only briefly. Local autonomy was provided in international treaties but later on those were not honoured by the Polish government and the area experienced much ethnic tension between the Polish and Ukrainian population.

The region and its capital city take their name from the time of Galicia-Volhynia, when Daniel of Galicia, the King of Rus' founded Lviv, naming the city after his son, Leo. During this time, the general region around Lviv was known as Red Ruthenia (Cherven' Rus').

The region only became part of the Soviet Union under the terms of the Molotov-Ribbentrop Pact in 1939, when it was annexed to the Ukrainian SSR. It was occupied by Nazi Germany from 1941 to 1944 and remained in Soviet hands after World War II as was arranged during the Teheran and Yalta conferences. Given its historical development, Lviv Oblast is one of the least Russified and Sovietized parts of Ukraine, with much of its Polish and Habsburg heritage still visible today.

The terrain of Lviv Oblast is highly varied. The southern part is occupied by the low Beskyd (ukr: Бескиди) mountain chains running parallel to each other from northwest to southeast and covered with secondary coniferous forests as part of the Eastern Carpathians; the highest point is Pikuy (1408 m). North from there are the wide upper Dniester river valley and much smaller upper San River valley. These rivers have flat bottoms covered with alluvial deposits, and are susceptible to floods. Between these valleys and Beskyd lies the Precarpathian upland covered with deciduous forests, with well-known mineral spa resorts (see Truskavets, Morshyn). It's also the area of one of the earliest industrial petroleum and gas extraction. These deposits are all but depleted by now.

In the central part of the region lie Roztocze, Opillia, and part of the Podolia uplands. Rich sulphur deposits were mined here during the Soviet era. Roztocze is densely forested, while Opillia and Podolia (being covered with loess on which fertile soils develop) are densely populated and mostly covered by arable land. In the central-north part of the region lies the Small Polesia lowland, geographically isolated from the rest of Polesia but with similar terrain and landscapes (flat plains with sandy fluvioglacial deposits and pine forests). The far North of the region lies on the Volhynia upland, which is also covered with loess; coal is mined in this area.

The climate of Lviv Oblast is moderately cool and humid. The average January temperatures range from −7 °C (19 °F) in the Carpathians to −3 °C (26.6 °F) in the Dniester and San River valleys while in July the average temperatures are from Template:Convert/Dual/LoutAonDbSoffT in the Carpathians to 16–17 °C (61–63 °F) in Roztocze and 19 °C (66 °F) in the lower part of the Dniester valley.[4] The average annual precipitation is 600–650 mm (23.62–25.59 in) in the lowlands, 650–750 mm (25.59–29.53 in) in the highlands and up to 1,000 mm (39.37 in) in the Carpathians, with the majority of precipitation occurring in summer. Prolonged droughts are uncommon, while strong rainfalls can cause floods in river valleys. Severe winds during storms can also cause damage, especially in the highlands. The climate is favourable for the cultivation of sugar beets, winter wheat, flax, rye, cabbage, apples, and for dairy farming. It is still too cold to successfully cultivate maize, sunflower, grapes, melon, watermelon or peaches in Lviv Oblast. In the Carpathians conditions are favourable for Alpine skiing 3–4 months a year.

The Lviv Oblast is administratively subdivided into 20 raions (districts), as well as 9 city (municipalities) which are directly subordinate to the oblast government: Boryslav, Chervonohrad, Drohobych, Morshyn, Novyi Rozdil, Sambir, Stryi, Truskavets, and the administrative center of the oblast, Lviv.

The city of Lviv contains a well-preserved main square (Rynok) and numerous historical and beautiful churches. Other sites of interest are the historic Lychakivskiy Cemetery, the local museum of folklore, and the ruins of the famous Vysokyi Zamok. The name of the castle is tightly tied with the name of the city. There is also a museum of military artifacts, the "Arsenal".

Well-preserved local wooden churches, castles, and monasteries can be found throughout the Oblast. One of them is the Olesko Castle which is first remembered in 1327. Another castle that was built at the end of the 15th century is Svirzh Castle in the village of Svirzh, Peremeshliany Raion. One more and no less famous castle is the Pidhirtsi Castle. Its architectural complex consists of the three-story palace, Kostel, and small park. In Roztochia is also located the Krekhivsky monastery in the buch-pine grove at the foot of the Pobiyna mount. The whole complex consists of the Saint Nikola Church, the bell tower, numerous service structures, and defensive walls with towers. Another site worth of mentioning is the Tustan city-fortress which is built in the rock. The site was nominated as the historical and as the natural wonder of Ukraine. There also a nature complex in the valley of the Kamianka river in Skoliv Raion. Another natural wonder of the region is the Kamin-Veleten (Rock-Giant in English) which is located near city of Pidkamin in Brodivskyi Raion. The name of the local city means Under the Rock. A local museum of Ukrainian art and an institution of higher learning (Ivan Franko State University) are also present. 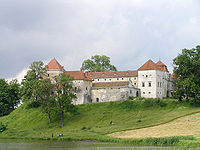 Most of Ukraine's oblasts are named after their capital cities, officially referred to as "oblast centers" (Ukrainian: обласний центр|, translit. oblasnyi tsentr). The name of each oblast is a relative adjective, formed by adding a feminine suffix to the name of respective center city: L'viv is the center of the L'vivs'ka oblast' (Lviv Oblast). Most oblasts are also sometimes referred to in a feminine noun form, following the convention of traditional regional place names, ending with the suffix "-shchyna", as is the case with the Lviv Oblast, Lvivshchyna.