Marchien Hogendoorn was born on 25 September 1893. Her parents were Simon Hogendoorn (1851-1932), a smith and Catharina Groeneveld (1863-1922). Marchien met one of her grandparents, Catharina van Vliet (1822-1896), who was the only one still alive when she was born. Marchien's siblings were Simon, Catharina, Pieternella, Hendrica, Suzanna, Cornelia Maria, Frits and Johanna. Hendrica and Johanna died in infancy. The family lived in Haarlem before moving to Schoten, where Marchien's father worked as a metal turner.

Marchien married Johan Overmars (1891-1946) on 13 October 1915 in Haarlem. Johan was a boilermaker from Deventer, Overijssel. Marchien's parents and Johan's mother Reintje de Winter (1864-) attended the wedding. His father, Lammert Jan Overmars (1863-1897) had died when Johan was six. Marchien and Johan were married for thirty years and had two daughters.

Marchien was widowed in 1946. She remained in Haarlem, where she died in 1964 aged 70. She was survived by her two daughters and their families.

Marchien lived here in Haarlem in her later years. 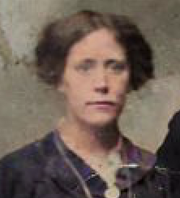