Familypedia
Register
Don't have an account?
Sign In
Advertisement
in: Ackerman (surname), Born in 1945, Ancestry from Germany,
and 18 more

Later, she became a partner in the Charlick's Feed Store restaurant in Ebenezer Place, Adelaide.

Currently, Maggie operates a business in the Barossa which produces a range of specialty gourmet foods, including Pheasant Farm Pate, quince paste, verjuice and a range of ice creams. She also co-hosted the ABC television cooking program The Cook and the Chef with Simon Bryant, who is the Head Chef for the Hilton, Adelaide, South Australia.

Maggie also has written several books about food and food preparation, as well as co-authoring a book with noted chef Stephanie Alexander.

In 2008, Maggie Beer won the Australian Publishers Association's llustrated Book of the Year for Maggie's Harvest.[1]

She was awarded the "Senior Australian of the Year" 2010. 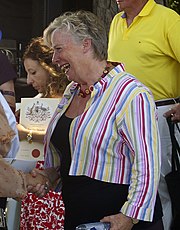