Familypedia
Register
Don't have an account?
Sign In
Advertisement
in: Van Buren (surname), Born in 1782, Died in 1862,
and 45 more

Martin Van Buren (December 5 1782 – July 24 1862), nicknamed Old Kinderhook (village), New York, was the eighth President of the United States from 1837 to 1841. Before his presidency he served as the eighth Vice President of the United States (1833-1837) and the 10th United States Secretary of State under Andrew Jackson. He was a key organizer of the United States Democratic Party, a dominant figure in the Second Party System, and the first president who was not of English, Irish, Welsh, or Scottish descent. Van Buren was the first President who did not experience the American Revolution firsthand. He is also the only president not to have spoken English as a first language, having grown up speaking Dutch language. For a detailed biography, see the Biography tab. 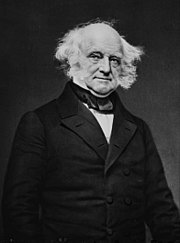