Familypedia
Register
Don't have an account?
Sign In
Advertisement
in: Fielding (surname), Born in 1801, Died in 1852,
and 14 more

(21 July 1801 England-21 September 1852 Salt Lake City), married on 14 September 1844. She was an early member of the Latter Day Saint movement, the second wife of LDS Church leader Hyrum Smith and the mother of Joseph F. Smith. Her marriage to Heber happens about 3 months after the assassination of her first husband.

In 1834, Mary emigrated to join her brother Joseph and her sister Mercy in Toronto, Canada.

The three Fielding siblings were introduced to the newly formed LDS religion in 1836, and were promptly baptized. Mary moved to Kirtland, Ohio the following year to join the larger body of the church. Well educated, Mary earned a living through teaching school, tutoring private pupils and acting as a governess. At the suggestion of the LDS prophet, Joseph Smith, Jr., the recently widowed Hyrum Smith courted Mary Fielding and the couple married on December 24, 1837. Mary accepted the responsibility of caring for and raising Hyrum's children from his first marriage, including the future church patriarch John Smith.

In late 1838 Hyrum was among the church leaders taken off to prison by the Missouri militia. At this time Smith was pregnant with her first child, Joseph Fielding Smith. Mary Smith went to Quincy, Illinois with the Saints, and after Hyrum escaped from jail, they moved to Nauvoo. Their second child, Martha, was born in Illinois.

After Hyrum was murdered in 1844, Mary Smith chose to follow the direction of Brigham Young and the Quorum of the Twelve Apostles. She and her family were among the poorer saints driven out of Nauvoo in the fall of 1846, who experienced the incident later known as the miracle of the quails. She went to Winter Quarters and then on the Salt Lake City.

One story recounts Smith's trip across the plains with Heber C. Kimball's company. One of the captains, Cornelius P. Lott, questioned her preparation and suggested she stay behind and wait for others to help her. He called her a burden to the whole company. In response, Mary "prophesied" that she would not only stay but would beat Lott to the Salt Lake Valley without any of his help. She reportedly arrived in the Valley one day before Lott.

Mary Fielding Smith died in Salt Lake City, Utah Territory at the home of her second husband Heber C. Kimball, apparently of pneumonia. She was buried at Salt Lake City Cemetery. Although she was widely known and respected during her lifetime, her son, LDS Church President Joseph F. Smith, further enhanced her reputation after her death as he presented her as a role model of courage and faithfulness in public addresses, sermons and articles. 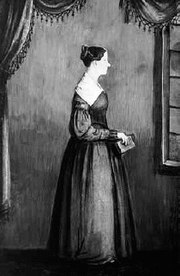