Mary Susannah Van Buskirk was born on August 13, 1880 in Pennsylvania to Thomas A. VanBuskirk and Mary Elmira Brown. She grew up most likely in Jay, Pennsylvania. By 1900, she was living at the house of the David Thomas family in Jay, Pennsylvania where she worked as a servant. Mary married John Thomas Harrison, son of Joseph Harrison and Sarah Jane Raisbeck, about 1905. They lived in Jay, Elk County, Pennsylvania where her husband John worked as a coal miner. In the 1910 census, boarders in her household were George Diez, Thomas Smart, Charles Erickson, and John Mock. In 1920, boarders were Abraham Mayes, John Filbough, George E. Boeker, Albert Meyer, Volover Andrews, and Joesph Getz. Sometime between 1920 and 1930, they moved to Fox, Elk County, Pennsylvania as they appear there in the 1930 census. Mary died in 1945. 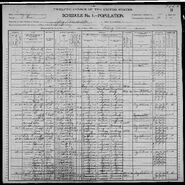