Familypedia
Register
Don't have an account?
Sign In
Advertisement
in: Ousamequin (surname), Born in 1581, Died in 1661,
and 6 more

Massasoit was the sachem or leader ("Massasoit") of the Wampanoags and also of the Wampanoag Confederacy. The term Massasoit means Great Sachem. Later called Ousamequin (meaning "Yellow Feather") lived in Montaup, a Pokanoket village at the site of what is now the town of Warren, Rhode Island. He held the allegiance of a number of lesser Pokanoket sachems.

Although he is not mentioned by name in any English accounts prior to 1621, he and his brother Quadequina are undoubtedly the "two Kings, attended with a guard of fiftie armed men" that met Captain Thomas Dermer at Pokanoket in May 1619, when he was returning Tisquantum ("Squanto (c1585-1622)") to his homeland.

Outbreaks of smallpox had devastated the Pokanokets, and Massasoit sought an alliance with the English against the neighboring Narragansetts who controlled an area west of Narragansett Bay in present-day Rhode Island. Massasoit forged critical political and personal ties with colonial leaders William Bradford (1590-1657), Edward Winslow (1595-1655), Stephen Hopkins (1581-1644), John Carver (1565-1621), and Myles Standish (c1584-1656), ties which grew out of a negotiated peace treaty on March 22, 1621. The alliance ensured that the Wampanoags remained neutral during the Pequot War in 1636.

The Mayflower, originating from London with a group of Adventurers bound for the New World rendezvoused on 22 July with the Speedwell just arriving from Holland with a group of religious refugees from Leiden. Originally intended to sail jointly to the English Colony in Virginia it soon became evident that Speedwell was not seaworthy. Passengers and cargo were combined onto Mayflower (with many left behind) for the journey, finally departing on September 9.

According to English sources, Massasoit prevented the failure of Plymouth Colony and the almost certain starvation that the Pilgrims faced during the earliest years of the colony's establishment.

There was some tension between Massasoit and the colonists when they refused to give up Squanto (c1585-1622) whom Massasoit believed to have betrayed him. This, however, was resolved in March 1623 when Massasoit was gravely ill and Edward Winslow nursed him back to health. After his recovery, Winslow reports that Massasoit said, "the English are my friends and love me... whilst I live I will never forget this kindness they have showed me." In return for their kindness, Massasoit warned the Plymouth colonists of a plot against them. He had learned that a group of influential Massachusett warriors intended to destroy both the Wessagusset and Plymouth colonies, and he warned the Pilgrims in time.

The alliance came under minor tension in later years, as the colonists needed to expand into new lands in order to support their growing colony. Massasoit sold a tract of land fourteen miles square to Myles Standish and others of Duxbury MA in 1649 to alleviate tension and maintain the peace between his people and the colonists. The sale took place atop Sachem Rock, an outcropping on the Sawtucket River in what is now East Bridgewater, Massachusetts. The site is listed on the National Register of Historic Places.

For nearly forty years, the Wampanoags and the English of Massachusetts Bay Colony maintained peace until Massasoit's death. Roger Williams (1602-1683) was banished from the Massachusetts colony and was taken in by Massasoit for several weeks. Massasoit was humane and honest, never violated his word, and constantly endeavored to imbue his people with a love of peace. He kept the Pilgrims advised of any warlike designs toward them by other tribes.

By 1632, Massasoit is almost always referred to by the name of Ousemequin (sometimes spelled Woosamequen), which translates to "Yellow Feather." Massasoit lived a long life, and remained a close friend and ally of the Plymouth Colony until his death around 1661. His son Mooanam, later called Wamsutta (and by the English known by the nickname "Alexander") became leader of the Wampanoag, and was succeeded in turn by his son Metacom (known to the English by the nickname "Philip").

In his person he is a very lusty man, in his best years, an able body, grave of countenance, and spare of speech. In his attire little or nothing differing from the rest of his followers, only in a great chain of white bone beads about his neck, and at it behind his neck hangs a little bag of tobacco, which he drank and gave us to drink; his face was painted with a sad red like murry, and oiled both head and face, that he looked greasily. All his followers likewise, were in their faces, in part or in whole painted, some black, some red, some yellow, and some white, some with crosses, and other antic works; some had skins on them, and some naked, all strong, tall, all men of appearance . . . [he] had in his bosom hanging in a string, a great long knife; he marveled much at our trumpet, and some of his men would sound it as well as they could.

In September 1623, Emmanuel Altham described Massasoit in a letter:

And now to speak somewhat of Massasoit's stature. He is as proper a man as ever was seen in this country, and very courageous. He is very subtle for a savage, and he goes like the rest of his men, all naked but only a black wolf skin he wears upon his shoulder. And about the breadth of a span he wears beads about his middle.

Massasoit had five children: "Moanam", or Wamsutta (c1634-1662), who was born sometime between 1621 and 1625; Pometecomet, Metacomet (1636-1676), or Metacom; a third son, Sonkanuchoo; and two daughters, one named Amie and one whose name is unrecorded. Soon after the death of Massasoit, Wamsutta and Pometecomet went to Plymouth and requested the Pilgrims to give them English names. The court named them Alexander and Philip. Wamsutta (c1634-1662) (King Alexander), the eldest, became sachem of the Pokanoket on the death of his father. Wamsutta died within a year, and his brother Metacomet (1636-1676) (King Philip) succeeded him in 1662.

It is unclear when Massasoit died. Some accounts claim that it was as early as 1660; others contend that he died as late as 1662. He was anywhere from 80 to 90 at the time. When Massasoit died, his son Wamsutta (Alexander) became his successor, but Wamsutta also died in 1662 and Metacom (Philip) succeeded him. Amie, wife of Tispaquin, was the only one of Massasoit's five children to survive King Philip's War in 1676.

From the record made (Circa 1651) by Gov Wm Bradford about early Plymouth settlers: 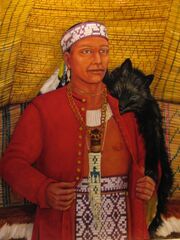