She was born as "Mathilde Sophie Amalia Pedersen", but later used the name "Sophia Pedersen".

She was baptized on Christmas Eve, December 24, 1872 as "Mathilde Sophie Amalia Pedersen".

Sophia and Klara appear in the 1900 Norway Census living in Farsund at Nykastelgaden 72a. Sophia was already a widow and working as a "restauratrice".

Around 1902 Matilde Sofie married Martin Andreassen (1865-after1930), a sailor and farmer. They lived in Korshavn, Norway.

She was traveling from Kristiansand, Norway on September 27, 1912, aboard the "Thingvalla" with her daughter Klara. They were listed as "Mathilde Sofie Schultz" and "Klara Schultz".

Sophia and Martin were living on Frankford Avenue in Galloway, Atlantic County, New Jersey in the 1930 US Census. Both say they were first married at age 21. They were listed as "Sophia Anderson" and "Martin Anderson". Martin was listed as a farmer and said he emigrated in 1906. Sophia said she emigrated in 1910. They owned their farm and it was valued at $3,000.

Clara was buried in Fairview Cemetery, Fairview, Bergen County, New Jersey on August 15, 1949. Her funeral notice did not appear in the Jersey Journal. 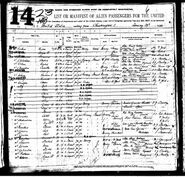 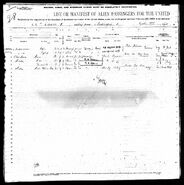 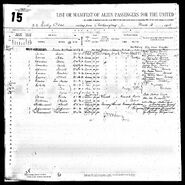