Familypedia
Register
Don't have an account?
Sign In
Advertisement
in: Burgess (surname), Born in 1875, Died in 1962, Migrants from the United Kingdom to Australia

After her husbands death Maud Lilley stayed at Einsley sheep and cattle station with her children and took the position of 'House Keeper', and had a Black Nanny to look after the children.

She met Arthur Darlington Bryer while working at the Station and married him on 24th March 1913. They left the West and went to Gladstone, Bundaberg, on the Queensland Coast to let the boys go to school and eventually settled in Brisbane.

By 1958, because her second husband (Arthur Bryer) was often in and out of hospital with a bad leg, Maud was often on her own, and couldn't look after herself. Therefore by September of that year she was permanently living with her son's family at Roghan Road, Fillmere, Australia.

When they were young Maud Lilley Burgess and her three sisters lived in the farmhouse at Latteridge, Iron Acton, Gloucestershire with their elder half-brother Samual Edward Burgess aka Eddie. Eddie, a Grocers Assistant, was left in charge of his half-sisters while their father was at work. George Burgess, their father, worked during the week as a Phrenologist in the Arcade, Bristol coming home on weekends to see his family and to see that everything was alright. Gertrude, her sister, always said Eddie had a cruel streak in him (towards animals) but he seemed all right with the girls (his half sisters).

The four sisters were supposed to go to a country school, but it was quite a while before the authorities caught up with them because they were so isolated in those days. However, when they did go to school, they had to travel (on foot of course) some distance, over fields, down lanes and along country footpaths to get there.

Several attempts were made by their father to provide them with a Governess, but no one would stay. This was partly due to the general isolation of the farm, but mainly due to the four girls; who did not want someone in authority living in and spoiling their fun; the last one only stayed only one night. Maud about 10 at the time and the oldest sister being 14 they considered they were old enough to look after themselves, and was determined to scare this one away; especially as she seemed the nervous type. Their plan was to undermine her confidence the day she arrived with tales of ghosts and hauntings. Then, when she’d settled down for the night they draped a sheet over a broom and with much ghostly wailing, tapped the broom on the transom window of the Governess' bedroom and waved it about. When they got up the next morning the Governess had already gone, leaving a note for their father. According to Gertrude, Maud's sister, their father (George Burgess) was puzzled to hear of the house being haunted and asked his daughters if they had heard or seen anything of this nature. As he seemed to have such faith in his children he put it down to another 'nervous townie'.

He was a bit of a softie with his girls; on one occasion he allowed them to tie his beard in rags, in the way girls used to do their hair at night to curl it. However, in the morning they were unable to get all the rags out. They were tied so tightly and so tangled up with his beard that he had to travel all the way to work with them in. It was a good few days before he could get them all out.

One of the pastimes of the girls, during the summer was to spread treacle/honey along the top of the stile. Then watch from the safety of the bedroom windows as people, particularly ladies with long dresses, got all 'sticky' as they climbed the stile. They probably new the Burgess children were the culprits, as theirs was the nearest house for some distance; but as children, they didn't think of that.

It may help to explain why they had quite a reputation in the nearest village for 'being wild', Gertrude told her granddaughter (Grace Baglin 1933-2006) that sometimes the girls would fix the trap to the pony and go into Iron Acton to collect friends. This was not always successful as the parents were not keen on allowing their daughters to go with the 'little wild Burgess's but on the odd occasion they were able to 'kidnap' the odd willing victim, but the irate parents were soon knocking on the door to rescue them. When Eliza and her sisters were older they started to make their own clothes, and according to Gertrude they were told by their father that they could chose whatever material, in whichever colour, made them happy. On at least occasion the girls made a special trip into Bristol to buy their requirements in a Draper shop in the Arcade. This is likely to have been one of their early 'material buying' days because they chose the most unsuitable materials on that occasion. Gertrude’s choice was curtain material that was too heavy for a day dress, but she liked the colour and texture and so was allowed to order a length 'because it pleased her'. Back in Latteridge the girls quickly realised their mistake when it came to the cutting out. None of them had actually been taught dressmaking so it was 'trial and error', laying the length of material on the table; the person whose dress it was to be, laying prone on top with one or other of the sisters cutting around her shape. Then, each one would help to sew the garment together. The end results were rather peculiar but over time they became quite proficient and 'got an eye' for it, cutting out, sewing up, adding the odd dart here and there to give the garment shape.

They kept pigs and chickens on the farm and each week would have one or the other for their Sunday dinner, alternately. Eddie (there half-brother) always did the slaughtering and as they grew older, the girls were taught how to pluck and clean, or singe and prepare the carcasses 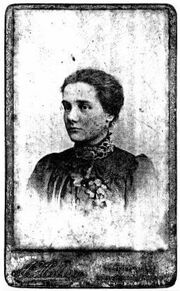