McGeorge "Mac" Bundy was an American expert in foreign and defense policy, serving as United States National Security Advisor to Presidents John F. Kennedy and Lyndon B. Johnson from 1961 through 1966. He was president of the Ford Foundation from 1966 through 1979. Despite his career as a foreign-policy intellectual, educator, and philanthropist, he is best remembered as one of the chief architects of the United States' escalation of the Vietnam War during the Kennedy and Johnson administrations.

After World War II, during which Bundy served as an intelligence officer, in 1949 he was selected for the Council on Foreign Relations. He worked with a study team on implementation of the Marshall Plan. He was appointed a professor of government at Harvard University, and in 1953 as its youngest dean of the Faculty of Arts and Sciences, working to develop Harvard as a merit-based university. In 1961 he joined Kennedy's administration. After serving at the Ford Foundation, in 1979 he returned to academia as professor of history at New York University, and later as scholar in residence at the Carnegie Corporation.

Born in 1919 and raised in Boston, Massachusetts, Bundy was the third son in a prosperous family long involved in Republican politics. His older brothers were Harvey Hollister Bundy, Jr., and William Putnam Bundy, and he had two younger sisters, Harriet Lowell and Katharine Lawrence.[1] His father, Harvey Hollister Bundy, hailing from Grand Rapids, Michigan, was a prominent attorney in Boston serving as a clerk for Justice Oliver Wendell Holmes Jr. in his younger days. Bundy's mother, Katherine Lawrence Putnam, was related to several Boston Brahmin families listed in the Social Register, the Lowells, the Cabots, and the Lawrences; she was a niece to Harvard president Abbott Lawrence Lowell (1856-1943).

The Bundys met and befriended Colonel Henry L. Stimson at some point of time. As Secretary of State under Herbert Hoover, in 1931 Stimson appointed Harvey Bundy as his Assistant Secretary of State. Later Bundy served again under Stimson as Secretary of War, acting as Special Assistant on Atomic Matters,[2] and serving as liaison between Stimson and the director of the Office of Scientific Research and Development, Vannevar Bush.[3] William and McGeorge grew up knowing Stimson as a family friend and colleague of their father.[4] The senior Bundy also helped implement the Marshall Plan.

McGeorge Bundy attended the private Dexter Lower School in Brookline, Massachusetts and the elite Groton School, where he placed first in his class and ran the student newspaper and debating society. 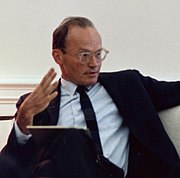