Meurthe-et-Moselle (French pronunciation: [mœʁte mɔzɛl]) is a department in the Lorraine region of France, named after the Meurthe and Moselle rivers.

Meurthe-et-Moselle was created in 1871 at the end of the Franco-Prussian War from the parts of the former departments of Moselle and Meurthe which remained French territory.

The current boundary between Meurthe-et-Moselle and Moselle was the border between France and Germany from 1871 to 1919 and again between 1940 and 1944. The only subsequent change took place in 1997 and involved the incorporation, for administrative reasons, of the little commune of Han-devant-Pierrepont which had previously fallen within the Meuse department.

Meurthe-et-Moselle is part of the region of Lorraine and is surrounded (counter-clockwise) by the departments of Meuse, Vosges, Bas-Rhin, and Moselle; and by the nations of Luxembourg and Belgium. Parts of Meurthe-et-Moselle belong to the Lorraine Regional Natural Park.

The department extends for 130 km from north to south and is between 7 and 103 km wide.

Its chief rivers are:

The economy was highly dependent on mining until the 1960s. There are iron, salt, and lime extraction sites.

The urban area around Nancy has a very dynamic economy based largely on services, research, and higher education.

The inhabitants of the department are known as Meurthe-et-Mosellans.

The area around Nancy has become highly urbanized, whereas the Saintois in the south is quite rural. 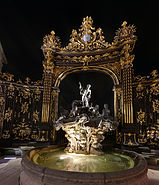 Detail of the Place Stanislas in Nancy, a UNESCO World Heritage Site

Walls and cathedral of Toul

House near the château of Prény

The Moselle river near Pont-à-Mousson