Familypedia
Register
Don't have an account?
Sign In
Advertisement
in: Polanyi (surname), Born in 1891, Died in 1976,
and 34 more

Michael Polanyi, FRS (born Polányi Mihály) (March 11, 1891, Budapest – February 22, 1976, Northampton) was a Hungarian–British polymath whose thought and work extended across physical chemistry, economics, and philosophy. He was a Fellow of the Royal Society and a Fellow of Merton College, Oxford.

Polanyi was born into a Jewish family. His older brother was Karl the political economist. Their father was an engineer and railway entrepreneur, and his mother's salons were well known amongst Budapest's intellectuals. Polanyi graduated in medicine in 1913, and served as a physician in the Austro-Hungarian army during World War I. During a convalescence (after contracting diphtheria) in 1917 he wrote what became a doctorate in physical chemistry from the University of Budapest (supervised by Gusztáv Buchböck).

In 1920, he emigrated to Germany, ending up as a research chemist at the Kaiser Wilhelm Institut for Fiber Chemistry in Berlin. There, he converted to Christianity and married Magda Elizabeth in a Roman Catholic ceremony. In 1929, Magda gave birth to a son John, who later went on to win a Nobel Prize in chemistry. Their other son became a distinguished economist. With the coming to power in 1933 of the Nazi party, Polanyi accepted the offer of a chair in Physical Chemistry at the University of Manchester. Because of his shift of interest from chemistry via economics to philosophy, Manchester created a new chair in Social Science (1948-58) for him.

In 1921, Polanyi laid the mathematical foundation of fiber diffraction analysis.

In 1934, Polanyi, at about the same time as G. I. Taylor and Egon Orowan, realised that the plastic deformation of ductile materials could be explained in terms of the theory of dislocations developed by Vito Volterra in 1905. The insight was critical in developing the field of solid mechanics.

From the mid-1930s, Polanyi began to articulate his opposition to the prevailing positivist account of science, arguing that it failed to recognise the part which personal commitment and tacit knowing play in science.

Polanyi argued that positivism encourages the belief that science ought to be directed by the State. He pointed to what happened to genetics in the Soviet Union, once the doctrines of Trofim Lysenko were deemed politically correct. Polanyi, like his friend Friedrich Hayek, supplied reasons why a free society is preferable. Together with John Baker, Polanyi founded the Society for Freedom in Science to defend this view.

Polanyi saw absolute objectivity (objectivism) as a delusion and false ideal.[1] He criticised the prevailing notion that the scientific method yields truth mechanically to the scientist. Instead, he argued that all knowing is personal, and as such relies upon fallible commitments.

Humans are never separate from the universe they observe, but instead participate personally in it, and thus cannot develop purely "objective" (e.g., unbiased) knowledge. Human skills, biases, and passions are not flaws but play an important and necessary role in guiding discovery and validation. Polanyi observes that the mark of a great scientist is the ability to identify for investigation those scientific questions which are likely to lead to successful resolution. This ability derives not only from the scientist's ability to perceive patterns and connections, but also from personal interests and biases. In turn, these biases fuel the scientist's willingness to risk his or her reputation by committing to a hypothesis and advocating it. He gives the example of Copernicus who rejected the reigning interpretation of the evidence of the sun the moon and the stars rising daily in the east and setting in the west to posit that the heavens did not revolve around the earth. Polanyi claimed that Copernicus arrived at the objective truth of the Earth's true relation to the sun, not by following a rigid method, but by giving in to "the greater intellectual satisfaction he derived from the celestial panorama as seen from the sun instead of the earth."[2]

What saves his claim that all knowledge is personal from relativism is his belief that our tacit awareness connects us with objective realities.

Our tacit awareness however relies upon assumptions acquired within a local context, so we cannot simply assume that they have universal validity; we must seek truth but accept the possibility of error. Any process of articulation inevitably relies upon that which is not articulated. Indeed, reliance upon what is not articulated is how words become meaningful, i.e. meaning is not reducible to a set of rules; it is grounded in our experience - where experience is not something that can simply be reduced to collections of sense data.

Polanyi also acknowledged the role played by inherited practices (tradition). The fact that we know more than we can clearly articulate helps contribute to the conclusion that much knowledge is passed on by non-explicit means, for example via apprenticeship i.e. observing a master, and then practicing under the master's guidance.

His writings about the practice of science influenced the thought and work of both Thomas Kuhn and Paul Feyerabend.

In his 1951 collection of essays, The Logic of Liberty, Polanyi applied his philosophy of science to economics. Polanyi noted that scientists cooperate with each other, or "self coordinate," in a way similar to the way in which agents coordinate themselves within a free market. Within a structure of liberty, people choose how to use their own resources to solve problems: inventors may research and produce new goods and services; scientists may produce and research new theories. Without central direction, consumers then determine the value of those products: buyers validate the best products by purchasing them, and communities of scientists validate the best theories by confirming and endorsing them.

"Profit," for communities of scientists, may loosely be thought of as the revelation of truth. In a similar manner, the legal community is a dedicated community committed to the pursuit of justice.

He argued that because ends such as truth and justice transcend our ability to wholly articulate them, a free society which seeks to give specialist communities the freedom to pursue these ends is desirable. Scientists, like entrepreneurs, require the freedom to pursue discoveries and react to the claims made by their peers. He urged societies to allow scientists to pursue truth for its own sake:

"...[S]cientists, freely making their own choice of problems and pursuing them in the light of their own personal judgment, are in fact cooperating as members of a closely knit organization. ...

"Such self-co-ordination of independent initiatives leads to a joint result which is unpremeditated by any of those who bring it about. Their co-ordination is guided as by an 'invisible hand' towards the joint discovery of a hidden system of things. Since its end-result is unknown, this kind of co-operation can only advance stepwise, and the total performance will be the best possible if each consecutive step is decided upon by the person most competent to do so. ...

"Any attempt to organize the group ... under a single authority would eliminate their independent initiatives and thus reduce their joint effectiveness to that of the single person directing them from the centre. It would, in effect, paralyse their cooperation."

Polanyi's work The Logic of Liberty and his understanding of polycentricity has had a lasting impact on the legal community. The basic idea is that unexpected repercussions make many judicial decisions unworkable because, in deciding a single dispute, the court exercises influence in myriad and unpredictable ways. Imagine tugging at a single strand of a spider web. Its reaction would be complicated enough just with that simple tug, but now double the force. The doubling of force will not simply double all of the previous reactions; the web will react in wholly new pattern of reactions that distributes tensions in a new and complex pattern. As Lon L. Fuller explained in an article in the Harvard Law Review, the judicial question becomes one of "knowing when the polycentric elements have become so significant and predominant that the proper limits of adjudication have been reached."[3]

Critique of Darwinism and reductionism

In the late 60's and early 70's Polanyi wrote essays dealing with issues regarding the origin of life. In Life's irreducible structure [4] he argues that the information contained in the DNA molecule is a non-material phenomenon irreducible to physics and chemistry. Polanyi argued that the reductionist approach which is considered the ideal of science was actually clouding our understanding, and that the recognition of life's irreducibility to physics and chemistry would enable genuine science to advance in the right direction, even if this demonstration should prove of no great advantage in the pursuit of discovery.

In Transcendence and Self-transcendence [5] he further criticizes the mechanistic world view science had inherited from Galileo, the paper is also thoroughly anti-reductionist. Using analogies Polanyi makes more arguments against determinism and mechanism in this paper. These papers are still being cited by scientists to this day and the arguments against mechanism and reductionism put forth by Polanyi in these papers makes him a favorite among intelligent design proponents as well as biosemioticians.

Polanyi's concept of tacit knowledge is most fully expressed in the Gifford lectures he gave in 1951–52 at the University of Aberdeen, later published as Personal Knowledge. It was while writing this work that he discovered what he calls the "structure of tacit knowing". He regarded this as his most important discovery. In tacit knowing persons experience the world by integrating their subsidiary awareness into a focal awareness, a process he referred to as "indwelling."

Michael Polanyi's son, John Charles Polanyi, is a professor of chemistry at the University of Toronto, Canada. In 1986 John Polanyi was awarded the Nobel Prize in Chemistry for his work on the "dynamics of chemical elementary processes."[6] His brother, Karl Polanyi, was a noted economist, and his niece, Kari Polanyi-Levitt, is Emerita Professor of Economics at McGill University, Montreal.

Wikiquote has a collection of quotations by or about:
Michael Polanyi (1891-1976) 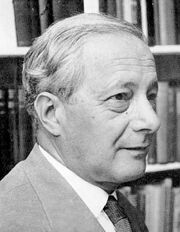