Familypedia
Register
Don't have an account?
Sign In
Advertisement
in: Messerly (surname), Migrants from Switzerland to Ohio

Descendants of Alpheus Messerly (1877) were identified by the Genographics project as being in Haplogroup B2a, possessing marker P15. This is not one of the more common Haplogroups in Europe, but has a wide distribution into central asia. The male line Messerly ancestor that first had this marker lived approximately 10,000 years ago in the middle east and followed herds into Europe as the most recent ice age glaciers retreated. During the middle upper Paleolithic period, this Haplogroup appears to have followed the mediterreanean route through Ancient Anatolia into southern Europe. High concentrations of B2a populations are found in the caucusus region as well as central asia.

There are James, Abraham and 2 John Meserole's in the 1790 census. However, this is a French, not Swiss name, and no connection has been found between spellings.

Samuel Messerly (c1794) arrives with Elizabeth and Christian settling in Clay Township, Tuscarawas County, Ohio. He could be related to Nicholas Messerly, but it appears unlikely at this point. (tbd- explain why)

Ohio is a location of primary interest due the concentration of migrations directly from Europe. 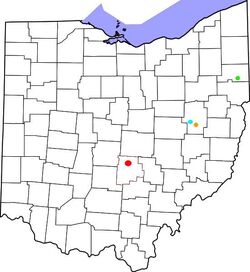