Monroe County is a county located in the U.S. state of West Virginia. As of the 2010 census, the population was 13,502. [1] Its county seat is Union[1]. Monroe County was created from Greenbrier County in 1799. It was named for James Monroe who eventually became the fifth President of the United States.

Monroe County was the home of Andrew Summers Rowan of Spanish-American War fame, who is immortalized in Elbert Hubbard's classic A Message to Garcia. The county was also the site of the 1928 discovery of the 34.48 carat (6.896 g) Jones Diamond by Grover C. Jones and his son, William "Punch" Jones.

Monroe County celebrates its own holiday, Farmer's Day, and is known for its close community.

Tributaries of the James River, part of the Chesapeake Bay

Tributaries of the New River

Tributaries of the Greenbrier River

Monroe County was formed on January 14, 1799 from portions of Greenbrier County. It was named after James Monroe, a Virginia statesman and senator, and the future fifth President of the United States.

Farmer's Day is held every year on the first Saturday in June in Union. Held in honor of the countless farming families in the surrounding area, the event is stretched out over the entire weekend, including the Friday evening dance held in the local grocery store's parking lot, the Pancake Breakfast and Farmer's Day Parade on Saturday, and the numerous shows, games, and activities that take place well into Sunday evening.

Fresh food produced by the citizens of Monroe County, is sold along the sidewalks, games for children can be found in the various parking lots, and live music by one of the local bands is played throughout the weekend. Popular events include the annual horse show, car show, and fire works. 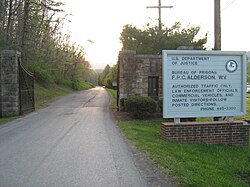 The Federal Bureau of Prisons' Federal Prison Camp, Alderson was the first women's federal prison in the country.[3] It is located in Monroe and Summers counties just west of Alderson.[4][5]

One of Monroe County's geological features is Haynes Cave, a former saltpeter mine.[6] Strange bones were discovered by the miners at the end of the 18th Century, and mailed to Thomas Jefferson. Jefferson's study of the animal, the Megalonyx jeffersonii was arguably the birth of American paleontology. It is now the official West Virginia state fossil.