View source
watch 01:25
Jurassic World: Dominion Dominates Fandom Wikis - The Loop
Do you like this video?
Play Sound
This article is based on the corresponding article in another wiki. For Familypedia purposes, it requires significantly more historical detail on phases of this location's development. The ideal article for a place will give the reader a feel for what it was like to live at that location at the time their relatives were alive there. Also desirable are links to organizations that may be repositories of genealogical information..
Please help to improve this page yourself if you can.

Not to be confused with Montgomery, Ohio.

Montgomery County is located in the southwestern portion of the U.S. state of Ohio. As of the 2020 census, the population was 537,309,[2] making it the fifth-most populous county in Ohio.[3] The county seat is Dayton.[4] The county was named in honor of Richard Montgomery, an American Revolutionary War general killed in 1775 while attempting to capture Quebec City, Canada.[5]

The following public school districts are located partially or entirely in Montgomery County:

The following private high schools are located in Montgomery County: 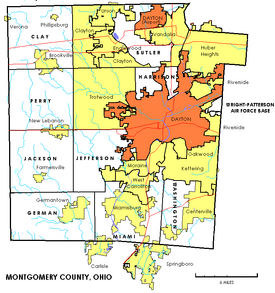