Prince of Belgorod-Kievsky
Prince of Smolensk
Prince of Novgorod

Mstislav Rostislavich (baptized - George or Fyodor [1][2], about 1148/1152 [3] - June 13, 1180 [4]) - Prince of Novgorod, son of the Grand Prince of Kiev Rostislav Mstislavich, Saint of the Russian Orthodox Church. The name Brave was not used during the life of the prince. For the first time it appears in the Novgorod first chronicle of the younger one [5] .

In 1168 he participated in the victory of the South Russian princes over the Polovtsians. Striving to control the inheritance of the Kiev Grand Duchy together with his brothers, sided with Andrei of Bogolyubovo in the conflict of 1169, but soon allied relations ceased in connection with Andrei's desire to subdue the Princes of Smolensk. The campaign of the troops of Andrei and his allies in 1173 ended with the unsuccessful siege of Vyshgorod. At the news of the approach of the applicant to the Kiev reign of Yaroslav Izyaslavich with the army of Halych, the siege was lifted. In the struggle for power in the Principality of Vladimir-Suzdal of 1174-1175, together with Gleb Rostislavich of Ryazan supported the henchmen of the old Rostov and Suzdal boyars, Yuri Dolgoruky's grandchildren Mstislav Rostislavic of Rostov and Yaropolk Rostislavich, against Mikhail and Vsevolod Yurevich, supported by the new craft towns and Svyatoslav Vsevolodovich Prince of Chernigov.

In 1179 the Novgorodians called him to reign. In 1179 Mstislav made a successful campaign against Chud at the head of the 20,000-strong army. In the spring of 1180, Mstislav wanted to move to Polotsk, but was stopped by his older brother [[Roman Rostislavich of Kiev (c1132-1180)|Roman Rostislavich]], who expelled Mstislav's son to help Polotsk. The campaign was canceled. Mstislav died on 13 June 1180 of a sudden illness. According to the chronicle, before his death he lost weight, and his tongue began to be taken away. Novgorodians buried Mstislav in the tomb of Vladimir Yaroslavich in Novgorod's Saint Sophia Cathedral in the chapel Nativity of the Virgin. His memory is performed locally on June 14 (27), and also in the days of Russian and Novgorod saints: respectively, in the second and third weeks of Pentecost. 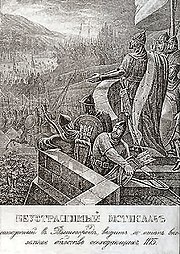